Home  ⁄  Manipur   ⁄   People without the knowledge of their origin are like a tree without its roots: Manipur minister Ranjan Sapam

People without the knowledge of their origin are like a tree without its roots: Manipur minister Ranjan Sapam

He said that people without the knowledge of their past history, their origin and their culture are like a tree without its roots 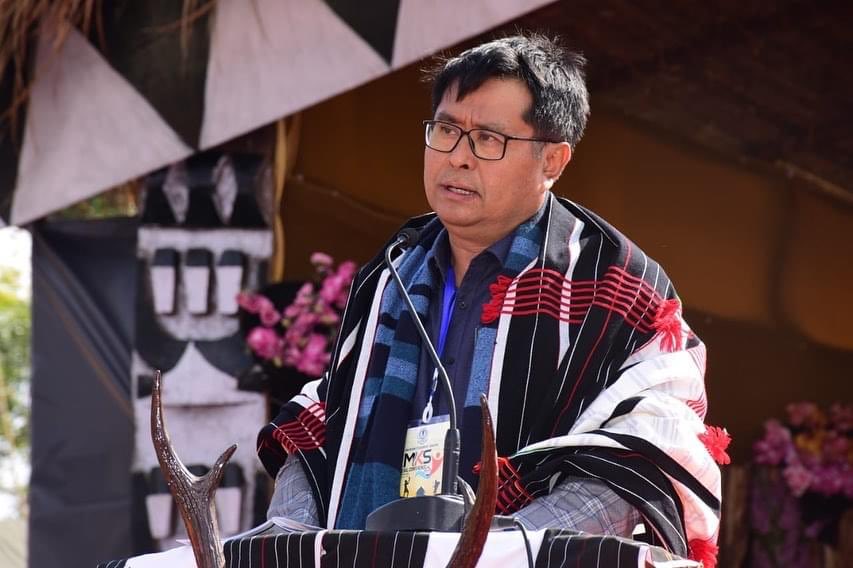 Health & Family Welfare Minister, Dr. Sapam Ranjan Singh has stated that people without the knowledge of their past history, their origin and their culture are like a tree without its roots.

He was speaking at the inaugural function of the 41st General Conference of the Maram Students Union/Maralui Karalimei Swijoikang (MKS) at Maram Khullen village in Senapati district under the theme, “Connecting to Roots.”

Speaking as the chief guest, Minister, Dr. Sapam Ranjan Singh stated the importance of the theme to know one’s roots and to be connected with one’s roots.

If one knows where one is from, it is harder for people to stop them where they are going.

A tree’s beauty lies in its branches, but its strength lies in the root. It is the roots which gives strength to the tree and not the branches. People without the knowledge of their past history, their origin and their culture are like a tree without its roots. The minister also mentioned the importance to know one’s traditions, folk songs, dances, musical instruments are what one needs to know.

Maram community has got beautiful cultural heritage, traditional attires which need to preserve that would pass on from one generation to another.

With the gathering of different young learners, the minister urged the need to learn the good things from one another. Different learners learn different subjects and diversified subjects.

The minister mentioned that such kind of students conference should be sharing ideas and to know each other and to do good things to the community at large. The minister appeals to all to make use of every moment and every second while attending the conference.

The Health minister also mentioned the need to discuss on environmental degradation in the state when such programs are organised as well as “War against drugs” which the state chief minister has much concern to bring a drug free state apart from education benefits.

Such important discussion could bring the state forward and to the forefront as well, he said. Advising the student community, the minister asserted to have the passion to do whatever one wants to do in whatever one wants to become in life which should be the driving force but should never be scared of failure.

“There is no one in this world who had never failed” but failure should not deter one from getting to next step. Failure should be a stepping stone to make sure that one works harder and succeed, he stated.

Manipur state under the able leadership of N. Biren Singh who is commonly known as “People’s CM” tries for development at all regions of the state at every level.

The minister urged all to support the Govt for good of all. With the pace of development that is taking place in the state, the minister is hopeful to turn Manipur into a tourist hotspot after 5-10 years. With presence of an international highway in the state (AH-1), many tourists want to visit Manipur and inflow of tourists could be seen who urged to try and make good use of the changing positive atmosphere in the state.

Manipur is known for presence of very unique cultures different from other states and stated the importance to make use of it. As promised by CM during his last visit, Maram area witnessed the upgradation of PHC at Maram bazaar to CHC and PHSC to PHC at Maram Khullen village who is committed to his words adding new proposals have been put up for new buildings.

COC Convenor, Pungdi P. Celestine stated that the ancestors and forefathers had chosen as their home and their descendants continue to live at this ancestral homeland. The students’ conference came back to the village after a gap of 28 years which was held at the same spot in 1995 when many of the delegates attending the program might not be born by then.

The COC convenor acknowledged the presence of many seniors and former students’ leaders of Maram Community.

Boco Kashung, President, MKS in his presidential address stated that the program could be organised under the legacy of the senior leaders who also urged the gathering to be united for any better change in the society.

Chief Minister N. Biren Singh sent his virtual greetings during the program although he could not attend the program personally due to his tight schedule.