As the trainer shrieked in pain and struggled to free himself from the tiger's clutches, the big cat bit his neck and pierced its teeth on his legs. 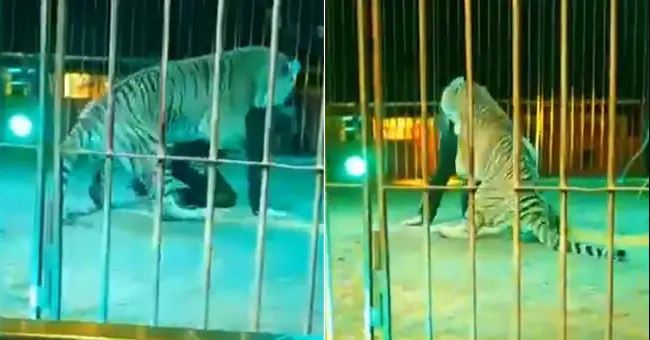 In a spine-chilling incident, a tiger attacked a circus trainer during a live performance in the Italian province of Lecce on Thursday evening, Metro reported. A video of the incident, which has surfaced on several social media sites has captured the terrifying moment when the circus trainer was hauled to the ground by the big cat.

The clip shared on Twitter shows the circus trainer concentrating on another tiger when the second tiger pounces on him from behind. As the 31-year-old trainer, identified as Ivan Orfei, shrieks in pain and struggles to free himself from the tiger’s clutches, the enormous cat bites on his neck and pierces his leg with its teeth. Meanwhile, people in the audience can be heard screaming.

Fortunately, Mr. Orfei escaped the tiger’s clutch after his assistant beat the tiger with a table, allowing him to limp away. He was rushed to Lecce’s Vito Fazzi hospital with deep wounds to the neck, leg, and arm. Luckily, he managed to escape life-threatening injuries and is currently in the hospital for treatment. The tiger, meanwhile, has been isolated following the show to undergo veterinary tests.

After the incident, the circus management posted a statement saying, ”The management of Marina Orfei Circus hugs their colleague Ivan Orfei who was a victim yesterday of an accident inside their own Circus Amedeo Orfei in Surbo. Ivan, a highly skilled professional trainer, was hit by a tiger during the show and luckily suffered minor injuries and his condition is of no concern.

Also Read : Sara-Vicky to Ranbir-Shraddha: Fresh on-screen Bollywood jodis to watch out for in 2023