Prime Minister Narendra Modi on Sunday inaugurated key infrastructure projects worth Rs 7,700 crore in the poll-bound state of Assam. With an aim to boost the state’s road infrastructure and 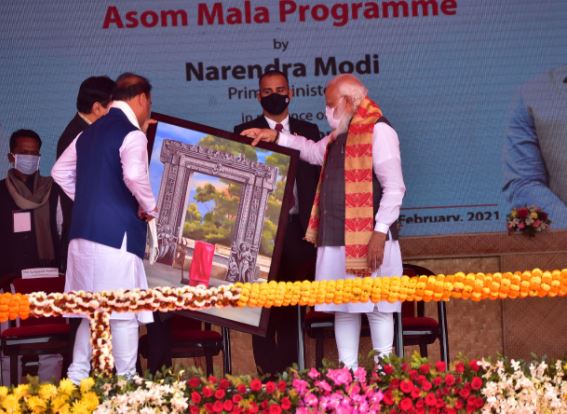 With an aim to boost the state’s road infrastructure and contribute to economic progress and connectivity, the Prime Minister launched the ‘Asom Mala’ programme in Dhekiajuli of Sonitpur district.

PM Modi also laid the foundation stones of medical colleges and hospitals in Biswanath and Charaideo.

The two medical colleges and hospitals with 500-bed capacity are being set up at an estimated cost of over Rs 1,100 crores.

Speaking at the programme, PM Modi said, “Assam gets the gifts of Asom Mala and two medical colleges in Biswanath and Charaideo today. I am so glad today.”

“Dhekiajuli is a historic land and a symbol of valour and pride. In 1942, Assam’s freedom fighters laid their lives to protect the honour of India’s pride. I bow down in their reverence. My heart is filled with Asomiya Pride,” he said.

“I was delighted to see the beauty with which Dhekiajuli was decorated last evening by lighting Diyas, and I posted a Tweet also on the same. I salute you for that,” the prime minister added.

This will mark PM Modi’s second visit to the two states in the last two weeks, as the BJP ramps up its campaigning efforts ahead of the upcoming Assembly election.