The wrath of floods in Assam has reared its ugly head once again, with animals in world famous Kaziranga National Park and the Dibru Saikhowa Park now struggling to survive 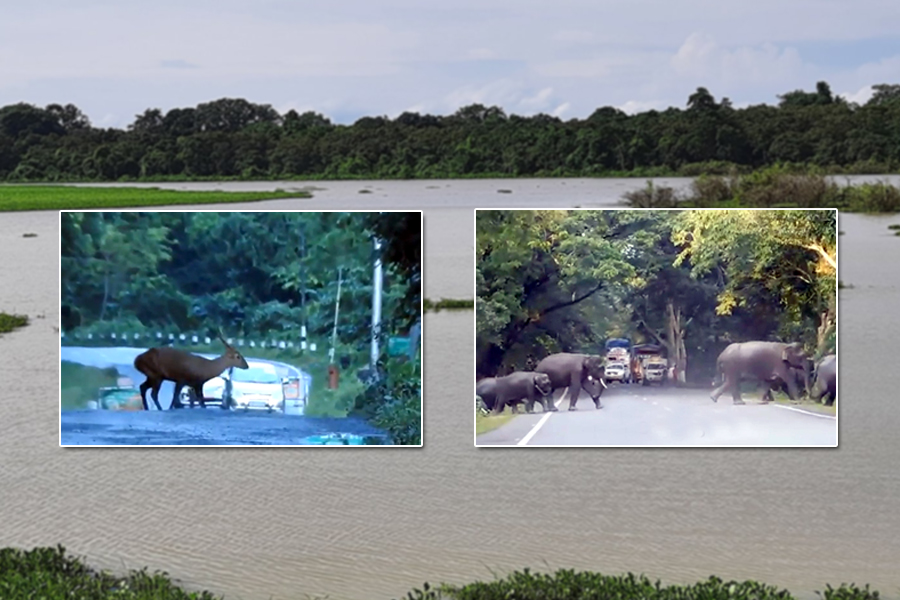 The wrath of floods in Assam has reared its ugly head once again, with animals in world famous Kaziranga National Park and the Dibru Saikhowa Park now struggling to survive amid the ravaging floodwaters.

Additionally, over 2.5 lakh people in 16 districts have been displaced due to the floods.

The lush green Kaziranga National Park stands amid the ravaging impact of floods. Large tracts of the park have been inundated forcing animals to cross the NH-37 in search of higher grounds. The common people are also concerned over the safety of animals in the National Park.

Meanwhile, park authorities have issued time cards to regulate traffic in the animal corridors. The time cards have been issued to ensure safety of animals that have come up to the highway. The general speed limit is 40-kilometre per hour through the park, with the limit as low as 20-km per hour in certain patches that animals use frequently.

This move comes after two hog deer’s were killed after being knocked down by a speeding vehicle on Saturday evening.

Even a concerned Chief Minister Himanta Biswa Sarma on Monday appealed to vehicle owners and drivers to avoid NH715 for commuting to lower and upper Assam, and use the NH17 instead.

We all take pride in Kaziranga National Park. In wake of floods causing displacement of Kaziranga animals & putting them on risk, may I appeal to truck / other vehicles to avoid NH 715 for commuting between lower & upper Assam & use NH 15 thru North Bank instead? pic.twitter.com/pYrwZWskue

On the other hand, 70 percent of the Dibru Saikhowa National park has also been flooded, forcing animals to flee to highlands.

Two feral horses were rescued after being washed away to a sandbar at Jonai in Dhubri district. It is being alleged that the forest department officials refused to take custody of the feral horses which are now being looked after by the SDRF. Three feral horses are already dead in the deluge.

The Dibru-Saikhowa National Park, spread over Dibrugarh and Tinsukia districts at the eastern tip of Assam, is famous for its small population of feral horses which are the fourth and fifth generation of wild horses presumed to have escaped from army camps during the World War II.

The flood situation in Assam worsened on Sunday with more than 2.5 lakh people across 16 districts bearing the brunt of heavy rainfall.

According to the Assam State Disaster Management Authority, Lakhimpur is the worst-hit district with over one lakh people being affected by flooding followed by Majuli where about 57 thousand people reel in floodwaters.

The Central Water Commission also pointed out that the Brahmaputra was flowing above the normal range, tilting towards severe flood situations in Dibrugarh, Jorhat, Sonitpur, Goalpara, Kamrup and Dhubri districts due to continuous rainfall.

While no human casualty has been reported in the flooding so far, the rising water levels continue to pose a threat to wildlife as well as people of the state, with incessant rainfall making things all the more difficult.