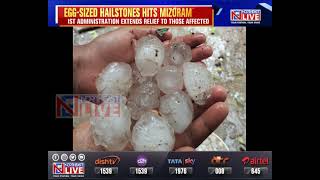 Over 200 houses damaged in hailstorm in Mizoram

#Mizoram | Heavy rain, gusty wind and a massive hailstorm have caused damages to at least 200 houses in the state, as per official figures. However, no casualties have been reported so far. The hailstorm hit Phuaibuang and other neighbouring villages in Saitual district bordering Manipur on Saturday evening. Heavy rain accompanied by gusty wind […]

Arunachal Pradesh has been ravaged by storms causing widespread damage 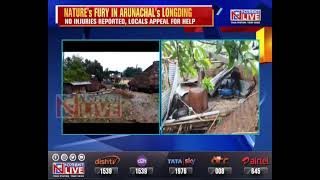 #Arunachal | In news coming in from Arunachal Pradesh, a massive storm has created a major havoc and damaged several houses in #Longdingdistrict of Arunachal Pradesh last night. The storm which began at around 8pm on Friday has damaged many settlements apart from granaries and a community centre in the Zedua village of Longding District. […]

Over 200 houses have been damaged in massive storms that battered Mizoram’s Kolasib and Mamit districts. Fortunately, no casualties have been reported in the storm that hit the two districts on Saturday and Sunday. According to a preliminary report, at least 220 houses and a church building were damaged in Kolasib district and about 18 […]

Arunachal: Restoration work on in 6 villages of Tezu after storm wreaks havoc

Massive restoration work is on in at least six villages under Tezu legislative assembly constituency in Lohit district of Arunachal Pradesh after heavy rains followed by cyclonic storms lashed through these areas causing destruction. The six villages are Koraliang, Pomliang, Huchaling, Loiliang, Lohitpur and Shivajinagar. Tezu MLA Karikho Kri who is overseeing the restoration works […]

At least five persons have been killed and several were left injured after the state of Assam was hit by heavy rains and storm amid Bihu celebrations. Four women were killed in Tingkhong and Mora circle in Dibrugarh district of Upper Assam after a storm uprooted a bamboo tree under which the victims were taking […]