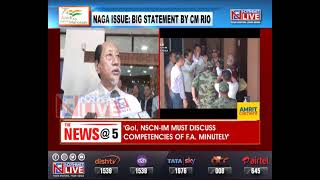 Tuccu said that sovereignty is the inherent right of the Nagas as the Framework Agreement says that “Sovereignty lies with the people."

Flag & constitution not the cause of talks impasse: NSCN-IM

The NSCN-IM has come out in defense of its stand stating that the flag and constitution issues have not delayed the solution to the peace talks as is being alleged by some people. In a statement issued, the NSCN-IM said that the Nagas are reeling under utter confusion about the Peace Talks and have subsequently […]

Officially the FA signed on August 3, 2015, had resolved the principle issues, but the core point is the non-action on competency, the NSCN-IM added.

CM Neiphiu Rio reiterated that the Parliamentary Committee on Naga Political issue will do everything possible to ensure the success of the peace talks.

The business community of Borduria have lodged an FIR against the NSCN militant leader Lolium Latey Lowang.

In what has come as a breakthrough security forces have recovered a HK series rifle along with 40 rounds of live ammunition during the ongoing operation against suspected NSCN (IM) militants at Kapu village in Tirap district of Arunachal Pradesh this morning. Reports are also rife that a suspected NSCN (IM) cadre may have been […]