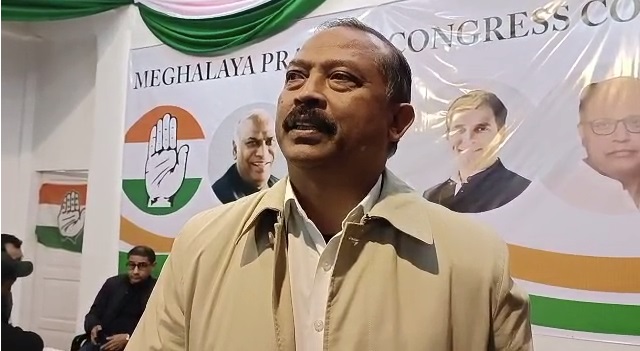 Pala while expressing his views on resumption of legal coal mining in the state, alleged that the government had stopped coal mining, but if one pays money such activities are allowed.

“Coal mining is a big issue. Almost more than a million people in Meghalaya depend on coal mining direct or indirect. I think what they have promised within 180 days, that opens only for high level people. You know they stopped coal mining, but if you pay money then it will be open,” Pala alleged.

The Meghalaya Congress president further went to allege that the government has also stopped activities like sand mining and even limestone mining.

Vincent Pala said, “They stopped different activities like sand mining, but when you give money it will be open. Now, they have stopped even limestone mining but if you give money they (government) will open. So they stop for it (money). Yesterday, I was in Umtiang they (people) said the high level corruption has even started for betel nuts and supaaris and everything.”

According to the Meghalaya Congress president, “the level of harrasment to the public, right from farmers to miners has increased a lot.”

Pala’s sharp reaction comes in the backdrop of the NPP releasing a Report Card on its achievements ahead of the assembly elections. He said,”So I think that whatever they have they given (report card) I dont think the people will trust them.”

The Meghalaya Congress president also said that people have lost trust in the government.

“I haven’t seen the report card. But whatever report card they are giving I think people will lose the trust, because whatever they (NPP) promised in the manifesto, whatever promises they made in the election, they (NPP) could not fulfil it,” Pala added.

Earlier, in March 2022 Chief Minister Conrad Sangma had informed the state assembly that scientific coal mining was expected to begin later that year.

The state has been suffering in terms of revenue generation due to the ongoing ban on unscientific rat-hole coal mining imposed by the National Green Tribunal (NGT) in April 2014.