Meanwhile, Mizoram BJP has emerged as the single largest party in the MADC elections winning 12 seats.

Eleven seats of the Upper House are headed for elections on June 10, with the fight being between the ruling BJP and the SP.

This was stated by BJP leader AL Hek who said that they are ready to walk together in a bid to give the best governance to the people of Meghalaya.

The new joiners were inducted into the saffron party in the presence of Chief Minister Biplab Kumar Deb. 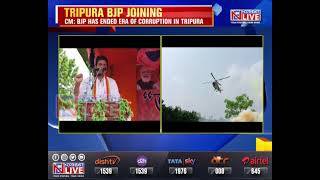 #Tripura | A major joining ceremony was held in Tripura’s Ambassa district which was attended by Chief Minister #BiplabKumarDeb yesterday. The event was held at the Chaomonu Bazar where a total of 102 voters from 48 families joined the BJP. All of the new joinees belong from the Tipra Motha and Congress parties. The new […] 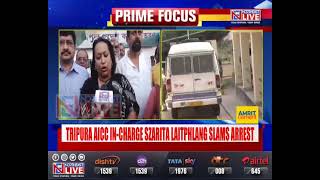 #Tripura | Congress workers in Tripura staged a protest in front of the Congress Bhavan in Agartala on Monday against the arrest of Gurajat MLA Jignesh Mevani by Assam Police. Condemning the arrest the protestors called it a grave misuse of law by the BJP government for suppressing any voice of dissent against PM Narendra […]

Congress MLA Jignesh Mevani to be produced in court today

Arrested Gujarat Congress leader Jignesh Mevani will be again produced in the court today. Mevani who was produced in the Chief Judicial Magistrate (CJM) court in Kokrajhar on Sunday, was sent to one-day judicial custody. As per reports, the court will be hearing Mevani’s bail plea and accordingly give its verdict. It may be mentioned […]

The BJP and ally AGP has swept the Guwahati Municipal Polls winning 58 of the total 60 wards. Of the 58, BJP has won 52 seats while the AGP won 6. The only solace for the BJP’s rivals came in the form of 1 victory each for the Assam Jatiyo Parishad and new entrant Aam […]

Live Paramilitary deployed in Manipur’s Churachandpur after violent protests/h5>26th May, 2022 14:28