Although the barter system cease to exist in any other part of the globe, but it is still alive at the Jonbeel Mela. 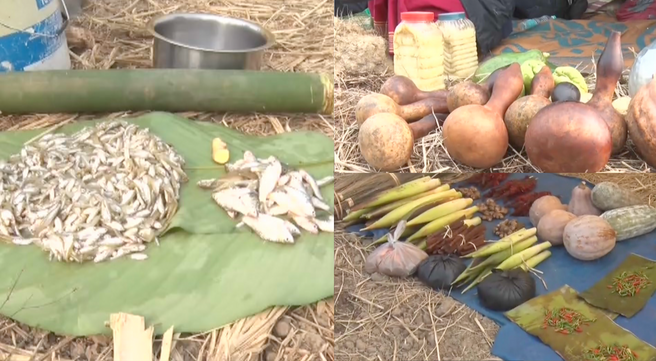 It is indeed a festive atmosphere at Jonbeel near Jagiroad in Assam as the historic Jonbeel Mela commences from today.

A 3-day extravaganza of socio-cultural exhibition, the Jonbeel Mela bears the testimony of the ancient Barter system, where people exchange their goods or agricultural produce between them.

Although the barter system cease to exist in any other part of the globe, but it is still alive at the Jonbeel Mela.

As per historical facts, the Jonbeel Mela first started before the 15th century AD. According to ancient scholars, it was organised by the Tiwa (Lalung) tribes of Assam to discuss the predominant political situations of Assam.

Jonbeel Mela is celebrated on the first weekend of Magh Bihu.

Indigenous tribal communities like Tiwa, Karbi, Jayantia and Khasi come down from the hills of Assam and Meghalaya with their own traditional and homemade products and they interchange their products with the native people in the plains via the barter system.

The Gobha King alongside his retainers visits the mela and gathers taxes on his subjects.

If one speaks about the significance of Jonbeel Mela the first day of the event marks the performing of Agni Puja, or worshipping God of Fire followed by community fishing.

A culmination of different tribes, the festival definitely goes a long way in spreading the message of peace, unity, brotherhood in the society, besides being a rich source of cultural exchange.