Home  ⁄  Assam   ⁄   G20 events in Assam: Where will the events be held, detailed itinerary, date & time and what to expect

G20 events in Assam: Where will the events be held, detailed itinerary, date & time and what to expect

Assam is all set to host a series of G20 meetings from February 1 to February 4. The state will be hosting 5 meetings -- four in Guwahati and one 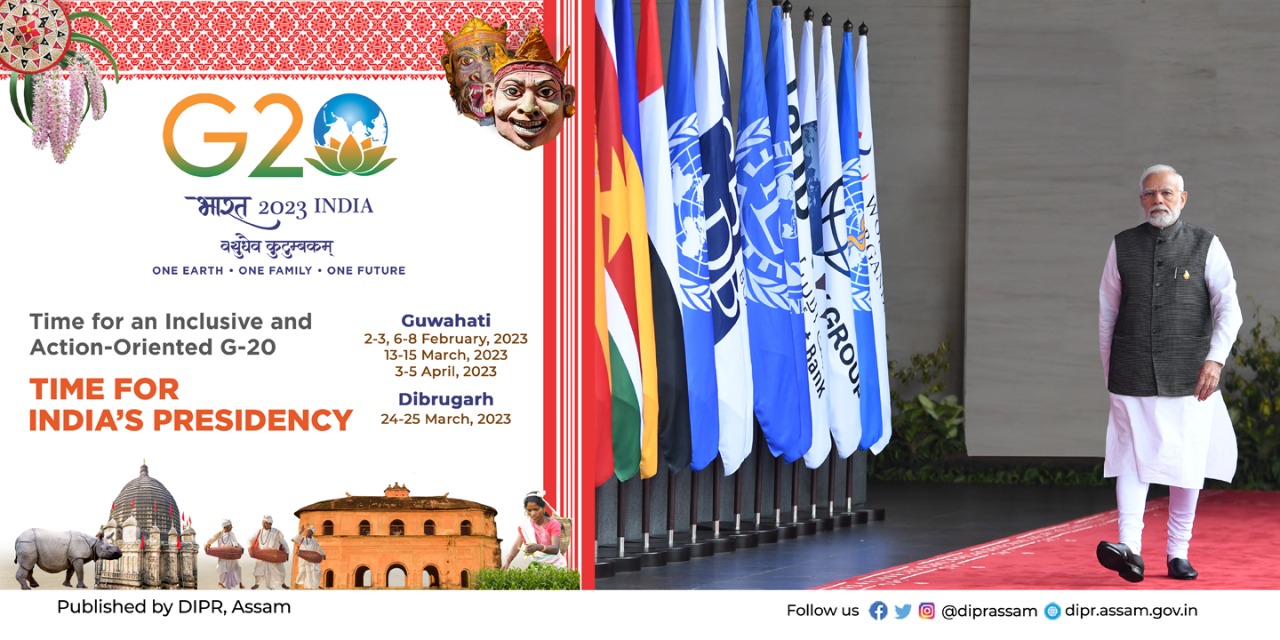 Assam is all set to host a series of G20 meetings from February 1 to February 4. The state will be hosting 5 meetings — four in Guwahati and one in Dibrugarh. Besides the main G20 meetings, the G20 delegates from the 20 countries who are members of the Group of 20 would be treated to the state’s rich and exotic culture, tradition and heritage.

Starting from a trip to Sualkuchi, known as the Manchester of the East for its cottage industry (Sualkuchi is the hub of Assam’s unique muga and pat silk found only in Assam and Sualkuchi is the only place where textiles from pat and muga are produced) to a wildlife safari to world famous Kaziranga National Park and Tiger Reserve, the delegates from the G20 nations would be in for some once in a lifetime experience in Assam.

The guests would be treated to some authentic Assamese delicacies like Khar, Aloo Pitika, Masor Tenga and other ethnic Assamese cuisine. They would also be taken on a cruise on the mighty Brahmaputra. Another high point of the G20 event would be the delegates’ visit to the Sandbar Island Brahmaputra – the riverine islands locally called Chars which are part of Brahmaputra River System. They would visit the ongoing Brahmaputra Festival for a real feel of the life and ways of Assam.

Here is what the itinerary of the delegates look like:

Jan 31 – Visit to Sualkuchi – hub of Assam’s pat-muga handloom and textiles
Feb 1 – Trip to IIT Guwahati for a plantation drive
Feb 2 – Yoga session in the morning
Inaugural address by Union Minister for Ayush Sarbananda Sonowal
Delegates to go on a river cruise in the evening
The meetings will be held at Hotel Radisson Blu, Guwahati.

Showcasing Assam’s culture:
Cultural programmes is an important theme for the state during the G20 events. Assam has a rich historical and cultural heritage. A series of cultural performances and events have been lined up for the guests-
• Sattriya Dance- This classical dance form of Assam has its origins in Sattras established by Vaishanite Saint Srimanta Shankardev in 15th and 16th century. Performances are lined up for the guests to enrich their Assam Experience. Nartan Kala Niketan will be performing in the events.

• Mukha Bhaona- This art form has achieved worldwide recognition and global attraction due to the complex movement of organs such as eyes, mouth and waving. Khagen Goswami and the team from Samuguri Sattra will be performing at the events.

• Jhumur Nritya—Jhumur is a traditional dance of the tea tribal communities of Assam and some parts of West Bengal.

• Bihu Dance — The most popular folk dance of Assam and the most important ingredient of Assam Experience. Artists would be welcoming guests with their aesthetic performances. Ranjit Gogoi and troupe would be performing at IIT Ghy at the Y20 Conference.

• Bodo Dance- Bagurumba folk dance is a colourful folk dance from Assam. It is a traditional dance of the Bodo community of Assam. This folk dance is inspired by and dedicated to the nature.

Showcasing Assam’s Cuisine, Natural Beauty and Wildlife
• Trip to World Heritage Kazirange National Park – one of the finest wildlife refuge in the world. The Ecosystem is a one of its kind. Arrangements have been made to give the guests an up close and personal encounter with wildlife in action.

• Sandbar Island Brahmaputra- these are riverine islands locally called Chars are part of Brahmaputra River System. Guests will be taken to visit the ongoing Brahmaputra Festival

The Group of Twenty (G20) is the premier forum for international economic cooperation. It plays an important role in shaping and strengthening global architecture and governance on all major international economic issues. The G20 was founded in 1999 after the Asian financial crisis as a forum for the Finance Ministers and Central Bank Governors to discuss global economic and financial issues.
The Group of Twenty (G20) comprises 19 countries — Argentina, Australia, Brazil, Canada, China, France, Germany, India, Indonesia, Italy, Japan, Republic of Korea, Mexico, Russia, Saudi Arabia, South Africa, Türkiye, United Kingdom and United States) and the European Union. The G20 members represent around 85% of the global GDP, over 75% of the global trade, and about two-thirds of the world population.

What does G20 Presidency mean for India?
India assumed the presidency of the G20 grouping from Indonesia, on December 1, 2022, and will hold the post for a year. This offers a unique opportunity for India to contribute to the global agenda on pressing issues of international importance. India’s G20 logo juxtaposes planet Earth with the lotus, India’s national flower and the theme is ‘Vasudhaiva Kutumbakam’ or ‘One Earth-One Family-One Future’. The G20 Logo draws inspiration from the vibrant colours of India’s national flag – saffron, white and green, and blue. The Earth reflects India’s pro-planet approach to life, one in perfect harmony with nature. The theme also spotlights LiFE (Lifestyle for Environment), with its associated, environmentally sustainable and responsible choices, both at the level of individual lifestyles as well as national development, leading to globally transformative actions resulting in a cleaner, greener and bluer future.
The G20 Presidency also marks the beginning of “Amrit Kaal”, the 25-year period beginning from the 75th anniversary of its independence on 15 August 2022, leading up to the centenary of its independence, towards a futuristic, prosperous, inclusive and developed society, distinguished by a human-centric approach at its core.

Significance of India’s G20 Presidency:
• G20 is the premier forum for international economic cooperation representing around 85% of the global GDP, over 75% of the global trade, and about two-thirds of the world population.
• During its G20 Presidency, India will host about 200 meetings in 32 different sectors in multiple locations across India.
The G20 Leaders’ Summit at the level of Heads of State/Government is scheduled to be held on September 9 and 10, 2023 in New Delhi.
• According to Prime Minister Narendra Modi, this term can be an opportunity for India to share its expertise with the world in areas of women empowerment, democracy, and digital technologies.
• As a country with core democratic values, India can show the world that the scope of conflict can come to an end when democracy becomes a culture. This gains significance amidst the ongoing Russia-Ukraine conflict.
• India’s foreign policy is focusing on the ‘global common good’. Through its G20 leadership, India hopes to extend this principle towards finding sustainable solutions to some of the key global challenges emerging out of the interconnectedness of the world, such as climate change, new and emerging technologies, food, and energy security, etc.
• During India’s Presidency, Indonesia and Brazil along with India would form the G20 Troika.