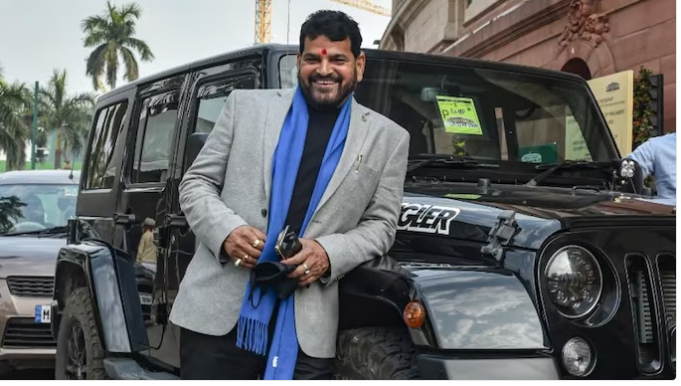 Wrestling Federation Of India president Brij Bhushan Sharan Singh is likely to step down from his post on 22nd January following the allegations from the wrestlers on Wednesday, reported India Today.

Vinesh Phogat, Bajrang Punia and a number of wrestlers protested against the president and the wrestling body at the Jantar Mantar in New Delhi on 18th January, said India Today report.

Now, reports have stated that the WFI President may offer his resignation from the post of President at the Emergent General Council meeting on January 22.

The WFI president had hit out at the wrestlers, saying that they were not ready to give trials or fight at the national level. He also said it was a well-planned conspiracy against him.

“As I came to know that wrestlers had started protesting in Delhi, I didn’t know what the allegation was about. I came to Delhi with a ticket,” Brijbhushan Sharan was quoted as saying.

“It is alleged that the federation is acting like a dictator. Neither will you give trial, nor will you fight at the national level. The problem is when the federation makes the rules. These players, who are sitting on dharna today, not even a single one of them fought in the national,” he added.

“This is a conspiracy against me…..a big industrialist has a hand in it. When Vinesh Phogat lost, it was me who motivated her,” the WFI president said.

“When Deepak Punia lost in the Tokyo Olympics, the Russian coach beat the referee. Vinesh Phogat did not wear Olympic dress. I will talk to the players. I am ready for any kind of investigation,” he added.

“Sexual harassment never happened. If even one athlete comes forward and proves this, I will hang myself,” he added. He also said that he would not resign from the post of WFI president.

“All these allegations, I hope she (Vinesh) writes them down and sends them to me. I will reply to what I can, and the rest can be investigated by the CBI or Police. This is a very big allegation,” he added.