Thousands Of Tiny Mites Live On Our Face, Mate At Night

A study published earlier this year said that these mites could be facing a problem with their DNA and are close to extinction. 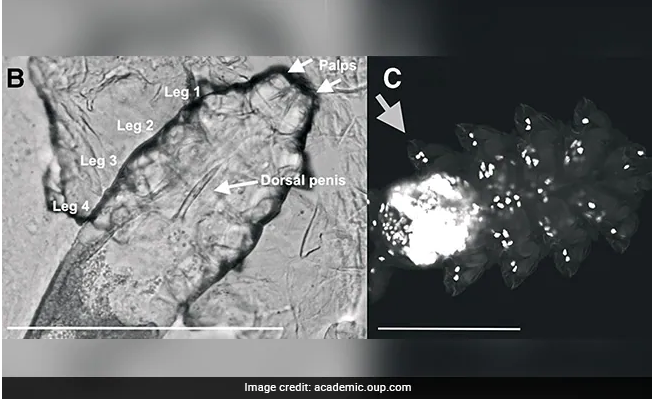 The animal kingdom doesn’t only comprise of big and scary animals, such as tigers and lions but also hundreds of tiny organisms that live in weird places and crevices. Like the Demodex folliculorum mites that spend their entire life living deep in our faces. Yes, you read it right. These mites do exist and at night, these 0.3-milimetre-long organisms leave the pores on our skin to find another follicle, meet a partner and mate, according to a report in the BBC.

These microscopic creatures are dependent on humans for their existence and survival. These mites are carried by nearly 90 per cent of the people and are mostly found the wings of the nose, the forehead and the ear canal.

Just the thought of such creatures living on our face can make fill you with disgust and distaste, but these mites lead a harmless life. And if you are thinking about using a facewash, or a scrub, there is no use because they live  too deep in your skin to be ever washed out.

But a study published earlier this year said that these mites could be facing a problem with their DNA and are close to extinction. It is based on the genome sequencing of these mite done by Dr Henk Braig from Bangor University and his colleagues.

They collected the genome by using a blackhead remover of a person’s nose and forehead. Each sample yielded about 40 D folliculorum mites.

The study revealed that these tiny creatures have lost a gene that protects them from ultraviolet light, which is why they are active at night.

“In the night, whilst we’re in a deep sleep, they visit the pores to have sex and have babies,” co-author of the study Dr Alejandra Perotti, from the University of Reading, told the BBC.

As their genetic make-up changes, these mites will become increasingly dependent on us, which can eventually lead to their extinction. And the issue is adaptation – the more they adapt to humans, the more genes they lose. There will come a time when these creatures won’t be able to leave our pores at all and find a new mate.

This development would lead to their end, said the study. It has been published in Molecular Biology and Evolution.

A BBC copy or reported by BBC