Police personnel conduct a mock drill ahead of the Republic Day, at Akshardham Temple, in New Delhi on Friday. 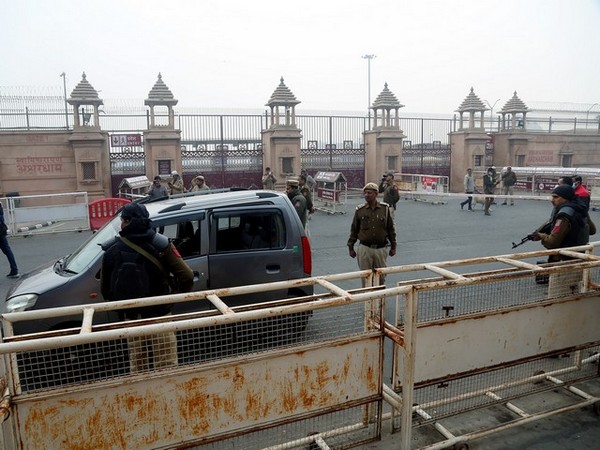 Two terror suspects arrested recently by Delhi Police for allegedly planning targeted killings in India were in direct contact with at least four persons who have links with Pakistan-based terror organisation Harkat-ul Ansar and Hizbul Mujahideen, investigators have found.
According to the Delhi Police, both Naushad Ali and his associate Jagjit Singh alias Jagga arrested last Thursday, were in touch with Nazeer Bhat, Nasir Khan, and Nazeer Khan of the Harkat-ul Ansar outfit and Nadeem from the Hizbul Mujahideen, which has been designated as a terror outfit in India and Canada.

The revelations come days ahead of the Republic Day celebrations in Delhi where security has been heightened for the event.
The duo was also in touch with certain gangsters namely Sunil Rathi, Neeraj Bawana, Irfan Chhenu, Hashim Baba, Ible Hasan, and Imran Pehelwan, police have found.
The two arrested terrorists were tasked to carry out targeted attacks on “right-wing Hindu leaders,” Delhi Police had said.
Delhi police have previously too, conducted a crackdown on the gangster-terrorists module after which NIA had also registered cases against gangsters under the UAPA. The gangsters against whom UAPA has been slapped include Lawrence Bishnoi, Goldi Brar, Vikram Brar, Neeraj Bawania, Tillu Tajpuria, Sukhpreet and Dilpreet and others.

Investigators say that probe into the history of Naushad Ali and Jagjit Singh suggests a connivance between gangsters and cross-border terror groups.

According to sources, in November 1996, Naushad had shot dead one Abdullah Sherwani of Assam for 2.25 Kg of RDX and Rs 11.5 lakh, a police investigation into the history of the two men revealed.

Investigators have told ANI that the RDX and money recovered from Sherwani, were stolen by him from one Nadeem, a close associate of Naushad and an active member of the Pakistan -based terror module Harkat-ul Ansar. In this case, both Naushad Ali and Nadeem were booked on charges of murder under the Explosive Act. One more accused Bilal Siddiqui, from Kashmir, who was involved in the RDX supply was later arrested.

Police have found that Naushad had committed his first murder in the year 1991, in which he stabbed one Jitender Dabla in the Jahangirpuri area to establish his supremacy in the area. It was later, when he was sent to jail, that he showed contacts with Pakistani terrorist Asfaq alias Arif of Lashkar-e Toiba, and Nadeem of Harkat-ul- Ansar, police said.

Police have also found that while serving time in jail, he had come in close contact with one Ashfaq alias Aarif, a Pakistani terrorist, sentenced to death in the Delhi Red Fort shootout case. It was Ashfaq who later introduced Naushad to Sohail, another Pakistani LeT terrorist who was transferred from a Kashmir Jail.
Talking about Jagjit, police said in November 2018, he along with his friend Ravinder Singh alias Happy had hired a car via the Internet from Uttarakhand’s Rudrapur booked it till Allahabad in Uttar Pradesh.
“They shot dead the cab driver and in the last week of November 2018 he went to the house of his brother-in-law at Ainokot in Gurdaspur, Punjab. This was when both Jagjit Singh and Ravinder Singh were arrested following an encounter with the police at Jhankaiya in Udham Singh Nagar,” said a senior police officer.

Jagjit, police said, came in contact with Bambiha Gang when he was lodged in Uttarakhand’s Haldwani Jail in a murder case. Later, in April 2022 he was released on 20 days parole but was attacked by criminals affiliated with the Lawrence Bishnoi gang in Gadarpur, Uttarakhand.
Jagjit then jumped parole and hid in Amritsar. It was also in Haldwani Jail when Singh came in contact with Shamsher Singh alias Shera Kahlo, his brother Happy Kehlo and others of the Arsh Dalla Gang.
For providing financial and legal assistance to gang members of Arsh Dalla, Jagjit Singh contacted Dalla’s known associate Manpreet alias Manna of Ludhiana, who in turn introduced him to Arsh Dalla, the investigators have found. (ANI)