On Camera: Schoolboy Hit By Car, Dragged For 1 km In UP

CCTV videos show Ketan trying to free his leg even as the car races through lanes with people running behind it, yelling at the driver to stop. 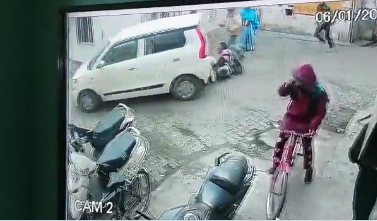 A 15-year-old schoolboy was dragged by a car for a kilometre in Uttar Pradesh’s Hardoi in a hit-and-run incident similar to the Delhi car horror. CCTV videos show the boy getting dragged behind the speeding car, an NDTV report said.

On Friday evening, Ketan Kumar, a Class 9 student, was on his way to a coaching class when a white Wagon R rammed into his cycle, police said.

The car knocked Ketan off his cycle after which his foot got entangled in the back of the vehicle. In an attempt to flee the scene, the driver sped off dragging Ketan behind him despite eyewitnesses urging him to stop.

CCTV videos show Ketan trying to free his leg even as the car races through lanes with people running behind it, yelling at the driver to stop.

The car was finally stopped by crowds when it reached a busy market area and the boy was rescued. Angry crowds caught the driver and beat him up with sticks. They also damaged the car.

The boy is currently receiving treatment for his injuries at a hospital.

Police in the area saved the driver from the crowd and arrested him.

This is the third reported incident this month where the victim was dragged by the car that hit them.

Two days ago, a delivery agent in Noida died after a car rammed his two-wheeler and dragged him for about 500 metres.

A 20-year-old Delhi woman was killed after she was dragged for 13 kilometers under a car that hit her.