Home  ⁄  topnews   ⁄   International: Want to be a millionaire? Get vaccinated!

International: Want to be a millionaire? Get vaccinated!

Joanne Zhu, an Australian woman, won $1 million after getting jabbed with the coronavirus vaccine. Millions of Australians who responded to the government’s appeal for vaccinations, were placed into the 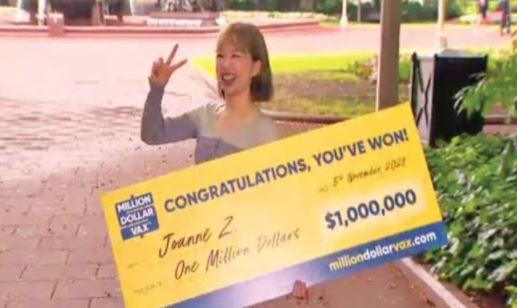 Joanne Zhu, an Australian woman, won $1 million after getting jabbed with the coronavirus vaccine. Millions of Australians who responded to the government’s appeal for vaccinations, were placed into the million dollar lottery to win a life-changing reward. Anyone who rolled up their sleeves in Australia got a chance to win a million dollars.

Joanne Zhu won the grand prize winner whose results were released in an weekend. The prize was founded by a group of donors and corporations to encourage vaccination rates among Australians. Zhu a native Chinese expressesed, “If the borders are open, I’d like to fly my family out of China first class and put them up in a five-star hotel for Chinese New Year.” “I’m going to buy gifts for my family and invest the rest of the money so that I can make more money in the future and help people who need it.”

According to a report published in Breezy, Joanne Zhu said that someone called her on Friday when she was in her workplace. She did not received the call at first, but later she called back and the authorities said about her becoming a millionaire on winning a million dollar as she was Australia’s only one.

In addition to the $1 million cash prize, the Million Dollar Vax initiative gave her 100 gift cards with $1000 in spending money. The cards were distributed throughout the month of October. The initiative is credited with assisting in the vaccination of more than 80% of Australians against the corona virus. Some countries have been able to reopen international borders for Australians due to this incredible breakthrough. It has also reduced the severity of Covid-19 restrictions and lockdowns.