A shocking video in which desperate Afghans who had clung on to the underbelly of a C-17 Globemaster falling down from the plane has gone viral on Monday. It appears

A shocking video in which desperate Afghans who had clung on to the underbelly of a C-17 Globemaster falling down from the plane has gone viral on Monday.

It appears that desperate Afghans were clinging on to either the undercarriage of the C-17 or the landing gear of the transport plane when they got flung out due to the huge G-force exerted during take-off.

“Locals near Kabul airport claim that three young men who were holding themselves tightly on to the tires of an airplane fell on top of people’s houses. One of the locals confirmed this and said that the fall of these people made a loud and terrifying noise,” tweeted Asvaka News Agency.

The incident happened after thousands of Afghans gathered at the Kabul airport to seek an evacuation flight amid Taliban’s takeover of the country. 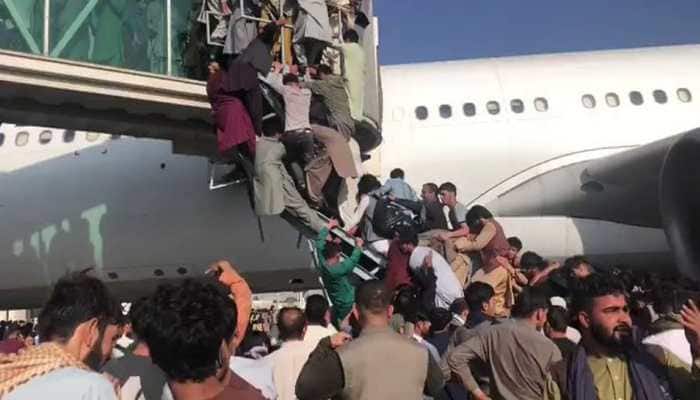 Witnesses reported seeing the prone, bloodied bodies lying on the ground just outside the terminal building.

The airport resembled a chaotic bus station as hundreds of people jostled, pushed and shoved to get on to a waiting plane.

Meanwhile, the US military has taken over the security at the Kabul airport to execute the massive airlift of diplomat presence in Afghanistan following the Taliban’s takeover of the capital city, The Wall Street Journal reported.

On Sunday the US Secretary of State Antony Blinken on informed that the President has sent additional forces to ensure an orderly and safe evacuation of the US diplomatic presence in Kabul.

In other recent development, over 60 countries including the US, United Kingdom, Japan, Germany and Canada on Sunday (local time) urged “all parties” to safeguard the departure of foreign nationals and Afghans who wish to leave the war-torn country, and said that roads, airports and border crossing must remain open.

Afghanistan government has collapsed with President Ashraf Ghani leaving the country and the Taliban’s entry into the capital, the New York Times reported. (ANI)

Live Sikkim: 2 injured in fire at petrol depot in Gangtok