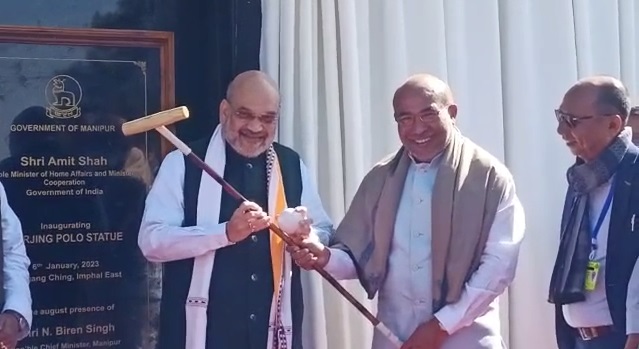 Besides, Shah also unveiled the 120 feet statue of a polo player riding a pony being developed at Heingang Marjing Hill in Imphal East district.

It may be mentioned that Manipur is the birthplace of polo but the modern-day sport of polo does have its origination in the northeast state. Polo, also known as Sagol Kangjei in Manipur, has great religious and mythological significance and to uphold this heritage and sport together.

The Home minister also hoisted the national flag at Heritage site of INA headquarters in Moirang area in Bishnupur district.

Besides, the Union Home Minister while harping on the development agenda claimed that BJP has transformed the state of affairs and ushered peace in the state.

Union Home Minister Amit Shah also took a jibe at the Congress and said, “There was a situation of terror during the Congress rule in Manipur. Now, it is among the best governed small states.”

After unveiling the unveiling the 120 feet statue of a polo player riding a pony being developed at Heingang Marjing HillI the Union Home Minister said, “It is believed that Sagol Kangjei, the modern-day Polo game originated in Manipur. This will surely take the legacy forward and inspire more youngsters toward the game.”