The Border Security Force (BSF) has seized 40 kg cannabis and 196 bottles of prohibited cough syrup at the India- Bangladesh border in an operation, the force said on Wednesday. 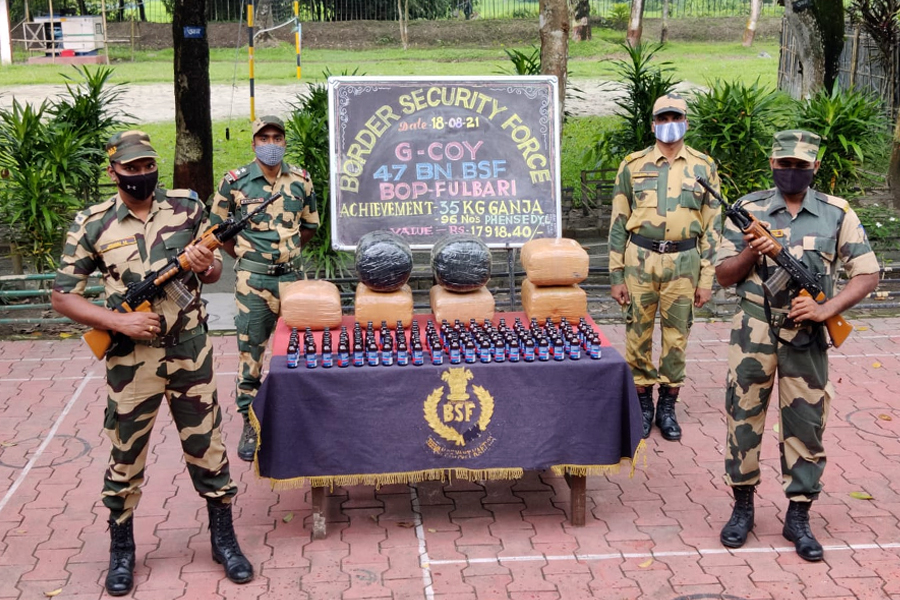 The Border Security Force (BSF) has seized 40 kg cannabis and 196 bottles of prohibited cough syrup at the India- Bangladesh border in an operation, the force said on Wednesday.

The operation was conducted by BSF’s 47 Battalion troops under the aegis of Guwahati Frontier on Tuesday.

“Maintaining the drive against Narcotics smuggling, the BSF troops of 47 Battalion under the aegis of Guwahati Frontier foiled the attempt of drug trafficking on Tuesday and seized 196 btl prohibited cough syrup and 40 kg Cannabis on India-Bangladesh border,” the BSF said in a statement.

Maintaining the momentum of operations against narcotics trafficking, the BSF troops of 75/192 Battalion under Guwahati Frontier seized 8.5 kg cannabis, 208 bottles prohibited cough syrup and 12 bottles liquor in various operations at India- Bangladesh border on the intervening night of August 10 and 11.

BSF troops of 192 Battalion under Guwahati Frontier on August 7 had also apprehended 10 Bangladeshis when they were trying to illegally cross India-Bangladesh International Border.

The BSF, a 2.5 lakh strong personnel force, is mandated to guard India-Bangladesh and India-Pakistan borders and curb illegal entry as well as illegal activities like smuggling of drugs, arms, cattle, fake Indian currency notes as well as human trafficking.

Despite the ongoing Covid-19 crisis, the BSF troops deputed on the India-Bangladesh border were kept busy by notorious smugglers trying to smuggle drugs, gold, arms and cattle across the border.

The porous border between India and Bangladesh is prone to smuggling and trans-border crimes and, therefore, BSF officials say that they have instructed all their patrolling forces and BOPs to be extra vigilant during this time as many criminals would be taking chances of smuggling along the border.