The Border Security Force (BSF) troops under the aegis of the Guwahati Frontier has apprehended three Bangladeshi nationals and seized 45 Bottles of phensydyl and 19.5 kg cannabis from the 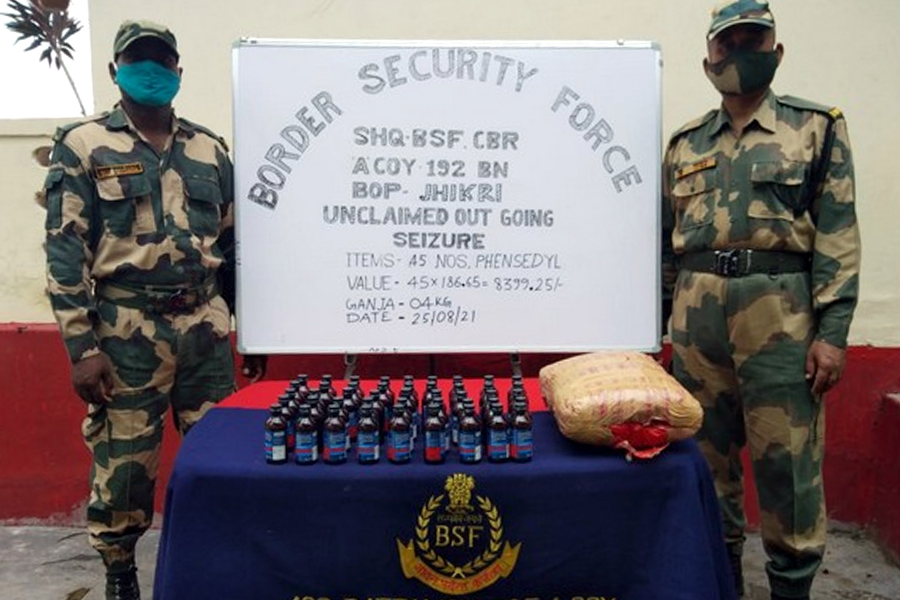 The Border Security Force (BSF) troops under the aegis of the Guwahati Frontier has apprehended three Bangladeshi nationals and seized 45 Bottles of phensydyl and 19.5 kg cannabis from the India-Bangladesh border here in two separate operations, the force said on Wednesday.

The three Bangladeshi nationals, including a man, a woman and a girl, were held at around 12:45 pm on Tuesday from the bordering area of village East Digaltari in Coochbehar district in West Bengal while trying to cross the international boundary (IB) illegally.

The apprehended Bangladeshi nationals were handed over to Border Guard Bangladesh (BGB) through flag meeting.

Besides, the BSF troops in the intervening night of Tuesday and Wednesday seized 45 bottles Phensydyl and 19.5 kg of cannabis in the district of Coochbehar at Indo- Bangladesh border in various operations.

The BSF signals it as yet another success in its crusade against border crimes including infiltration and exfiltration activities. The BSF conducted these operations on specific information.

In the purview of Administrative Programme of a state government ‘Dware Sarkar,’ scheduled to be held at Salmara (Assam) and the heavy rush were expected, resultantly the troops were put on high alert, said the BSF.

“Keeping in view of the vulnerability of border, heightened activities of the smugglers and anti-national elements on the border, BSF troops are always alert towards the issues of trans-border crimes including illegal infiltration and exfiltration and are making all-out efforts to prevent the commission of such crimes.” (ANI)