According to the Guinness World Records, bar-tailed Godwit (Limosa lapponica), known by its tag number "234684," flew 13,560 kilometres (8,435 miles) from Alaska to the Australian state of Tasmania without 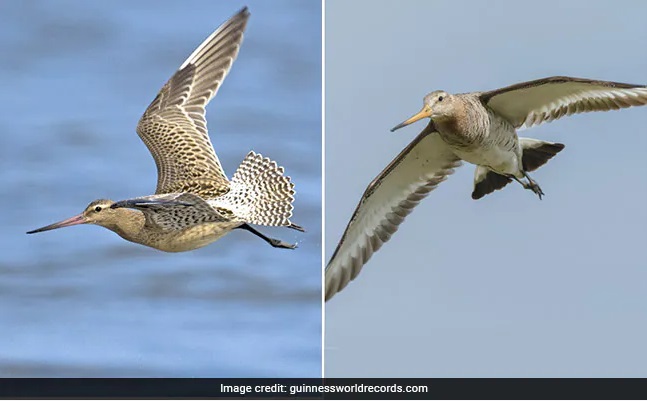 When a bar-tailed Godwit flew 8,435 miles non-stop from Alaska to Tasmania, Australia, it surpassed the previous record for the longest non-stop migration by a bird. The 11-day journey without rest or food was tracked by a satellite tag on the migratory bird.

According to the Guinness World Records, bar-tailed Godwit (Limosa lapponica), known by its tag number “234684,” flew 13,560 kilometres (8,435 miles) from Alaska to the Australian state of Tasmania without stopping for food or rest, breaking the record for the longest non-stop migration of a bird.

“The distance covered is equivalent to two and a half trips between London and New York, or approximately one-third of the planet’s full circumference. According to the 5G satellite tag attached to its lower back, the epic journey started on October 13, 2022, and continued for 11 days and one hour without the bird landing once,” the record-keeping organisation said.

This year’s Godwit exceeded the previous record of 217 miles, which was set in 2020 by another bird of the same species.

Eric Woehler of Birdlife Tasmania told Guinness World Records that the bird probably lost “half or more of its body weight during continuous day and night flight.”

“Short-tailed shearwaters and mutton birds can land on the water and feed. If a Godwit land on water, it’s dead. It doesn’t have the webbing on its feet, it has no way of getting off. So if it falls onto the ocean’s surface from exhaustion, or if bad weather forces it to land, that’s the end.”

However, this Godwit, which typically migrates to New Zealand, made a dramatic 90-degree turn and landed on the shores of Ansons Bay in eastern Tasmania, Australia.