Home  ⁄  topnews   ⁄   As temperature lowers in Himachal, tourism in the hills increase

As temperature lowers in Himachal, tourism in the hills increase

The higher reaches in Lahaul-Spiti, Chamba, Kangra, Mandi, Kullu, Kinnaur, Sirmaur and Shimla districts have received fresh snowfall during the past 24 hours 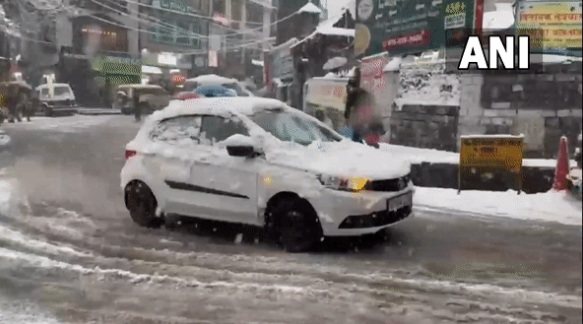 Amidst fresh snowfall tourist footfall increases in Shimla and they are seen more excited than before.
“We have come here to see snowfall. We had come for one or two days but eventually planned to extend as more snowfall has been forecasted here for the next 2-3 days,” a tourist Damanpreet said.

Amid the ongoing winter season, where the citizens in hill stations of the country are continuously facing difficulties in accomplishing day-to-day tasks, the tourist footfall in certain regions has also increased thus widening the smiles of the tourism dependents.

However, to boost tourism during the prevalent cold wave conditions here, the Himachal Pradesh Tourism Development Corporation (HPTDC) has decided to offer 40 per cent discounts on its properties for visiting tourists.

Director of the tourism department and MD (HPTDC), Amit Kashyap on Friday informed about the steps undertaken by the state for the tourists.

Amit Kashyap said, “The tourism department has given directions to the authorities and is also appealing to the tourists to follow the advisory of the authorities to avoid any inconveniences.”
“Despite being a lean tourist season, the department of tourism is expecting a good footfall of tourists in the region,” he added.

“Nearly one crore sixty lakh tourists visited Himachal Pradesh in 2022. A large number of people came to visit the place after the Covid-19 pandemic and the tourism department also gave a major thrust to the advertisement. The next two to three months in the state are lean tourism months but even in the next three months we are expecting a good footfall of tourists,” he said while terming the year 2022 “a very good year” for tourism in the state.

“Be it snow or any weather-related warning, the deputy commissioners and India Meteorological Department (IMD) issue advisories in the state. I would request the visitors to follow those advisories,” he added.

Meanwhile, heavy snowfall also continued in the Kullu district in Himachal Pradesh. Parts of two National Highways in the district– NH 305 closed at Jalori Pass and the NH that goes beyond Manali to Rohtang Tunnel– were also closed due to snowfall.

“There have been continuous rainfall and snowfall in the entire district for the last 18-20 hours. NH 305 closed at Jalori Pass, 18-20 inches of snow has further accumulated there. Another NH that goes to Rohtang Tunnel is closed too. Also, 45 other roads have also been closed due to snowfall,” Deputy Commissioner of Kullu, Ashutosh Garg said yesterday.

“275 roads are closed in snow-prone districts of the state and 330 electricity supply schemes disrupted due to the fresh snowfall in the last 24 hours,” the State Emergency Operation Centre said on Friday.
Notably, the Kufri and Mashobra areas of Shimla has also been covered under a white layer of snow.

The head of the India Meteorological Department (IMD) in Himachal, Surender Paul said to ANI on Thursday there can be a slight relief from the “dry spell” and the rain or snowfall is unlikely to occur on Saturday and Sunday (January 21 and 22).

“…There will be slight relief from the dry spell. Between January 21 and 22, there is unlikely any rain and snowfall,” IMD Head Surender Paul said on Friday further adding that the snowfall is expected on days thereafter with a heavy fall on Tuesday and Wednesday (January 24 and 25).