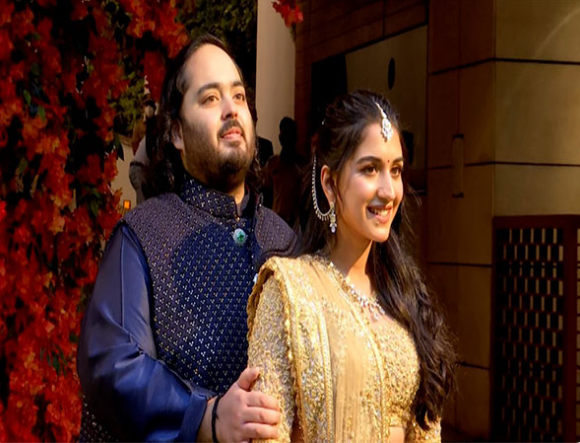 The couple had a traditional engagement ceremony where they performed old Gujarati rituals such as Gol Dhana and Chunari Vidhi.

Gol Dhana is a pre-wedding ceremony in Gujarati tradition, which is a kind of engagement. Gol means jaggery and Dhana means coriander seeds.

These items are distributed at the groom’s place where the event takes place. The bride’s family arrives at the groom’s residence with gifts and sweets and then the couple exchanges rings. After exchanging the rings, the couple seek blessings from their elders.

The Merchant family received a warm welcome from the Ambani’s at their residence amidst aarti and chanting of mantras.

Anant and Radhika have known each other for a few years and their engagement ceremony brought them closer to their upcoming marriage in the coming months.

Soon after their engagement ceremony, the couple was seen posing in front of the paps in traditional attire along with their family members.

Recently, the couple had a traditional roka ceremony at the Shrinathji Temple in Nathdwara, Rajasthan.
Radhika is the daughter of Viren Merchant, the CEO of Encore Healthcare. She hails from Kutch, Gujarat. She has trained in Bharatnatyam for eight years and is the disciple of Guru Bhavana Thakar of Shree Nibha Arts. In June 2022, Radhika made headlines after the Ambani family hosted a grand Arangetram ceremony at Jio World Centre. ‘Arangetram’ is a Tamil word which means ascending the stage by a dancer on the completion of formal training. It is the debut on-stage performance of a student of Indian classical dance and music following years of training.
Anant, son of Nita and Mukesh Ambani, completed his studies at Brown University in the USA and has since served at Reliance Industries in various capacities including as a member on the boards of Jio Platforms and Reliance Retail Ventures. He currently leads the energy business of RIL. (ANI)