100 Flights Disrupted At Delhi Airport Due To Thick Fog

Poor visibility affecting the northern parts of the country over the past few days, once again disrupted flight movement today. 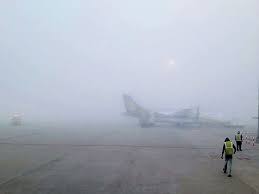 As many as 100 flights have been disrupted in Delhi alone as it continues to reel under severe cold conditions with a thick layer of fog blanketing the city again on Wednesday.

“Due to bad weather (fog) for three days, over 100 flights are reported delayed from and to Delhi airport, some have also been diverted to the nearest airport,” a Delhi airport official told ANI.

Even as the congestion at the airport in New Delhi was being tackled amid a busy yearend holiday season, the problems of air travellers increased once more with dense fog covering most parts of north India.

Poor visibility affecting the northern parts of the country over the past few days, once again disrupted flight movement on Wednesday.

According to the Delhi airport official, another reason for the delay in flights is that some airlines have not deployed their CAT-III-compliant pilots yet.

Delhi International Airport Limited (DIAL) advised passengers on Tuesday to check their flight status with the airline concerned as flight operations at Delhi airport was only for CAT-III compliant ones.

“While landing and take-offs are continuing at Delhi airport, flights that are not CAT-III compliant may get affected. Passengers are requested to contact the airline concerned for the updated flight information,” DIAL said.

CAT-III Instrument Landing System (ILS) allows flights to land safely in low visibility. CAT III-B ILS allows aircraft to land with a runway visual range (RVR) of up to 50m with a decision height of 15m.

According to Flight Information Display System (FIDS) at Delhi airport, over 18 flights were delayed till noon, most of which were bound to north Indian cities from Delhi, However, arrivals are on time.

Flight services were affected at West Bengal’s Bagdogra airport for around six hours on Tuesday as dense fog reduced visibility. The disruption caused inconvenience to hundreds of passengers.

On Tuesday, Vistara, SpiceJet, and IndiGo expressed regret for the delays and diversions.

“Early morning fog at Delhi has caused massive delays across the network. We’re trying our best to minimize the inconvenience caused..,” IndiGo said on Tuesday.