two men could be seen walking up to a parked car and then entering it and closing the doors. 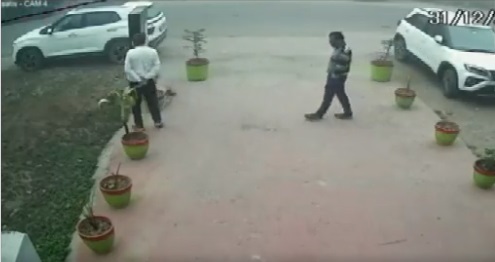 A woman in Haryana’s Yamunanagar, reportedly, narrowly escaped a kidnapping attempt on Saturday. The entire incident was recorded on a nearby installed CCTV camera.

According to the unconfirmed reports, the four men gave up their kidnapping attempt and ran away after the lady screamed and fought back. However, the police is investigating the matter to ascertain the truth behind the alleged crime and find out what exactly transpired.

In the video, making rounds over social media, two men could be seen walking up to a parked car and then entering it and closing the doors. Moments later they are seen rushing out of the car and running away.

According to the Yamunanagar Deputy Superintendent of Police (DSP), four people allegedly entered the woman’s car and tried to kidnap her.

“As she sat inside her car after the gym, four men tried to kidnap her. One of the accused has been caught,” the DSP said.

He further said that the intention of the accused men would be clear only after the probe ends. Investigation into the matter is underway. (ANI)