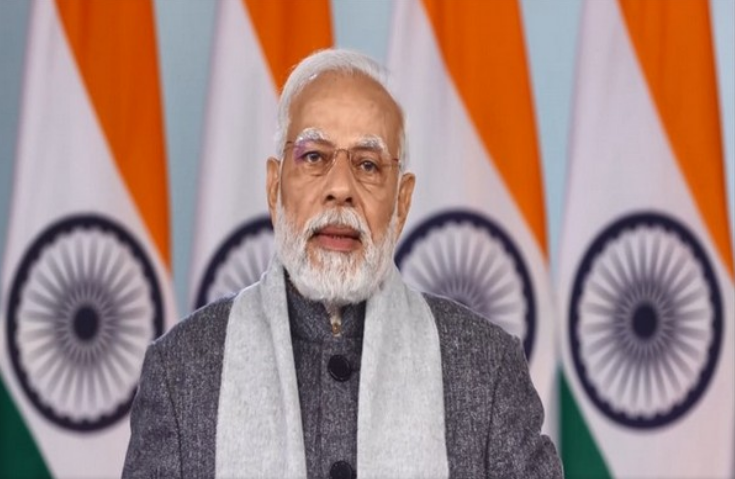 Prime Minister Narendra Modi on Sunday addressed the last Mann Ki Baat of the year 2022 and said that this year, the country had become the world’s fifth largest economy.
“The year 2022 was wonderful, India completed 75 years of Independence while ‘Amrit Kaal’ began. India progressed rapidly and became the world’s fifth-largest economy, and achieved the unbelievable record of 220 crore vaccines and crossed the USD 400 billion mark in exports,” PM Modi said in the 96th edition of Mann Ki Baat, a monthly radio programme of the Prime Minister.

He also talked about the Aatmanirbhar Bharat initiative of the government and lauded the launch of INS Vikrant.
The commissioning of India’s first indigenous aircraft carrier is a momentous occasion during the ‘Amritkaal’ of India’s 75 years of independence and signifies the country’s confidence and prowess.
This indigenous aircraft carrier is proof of the country’s technical acumen and engineering skills. This demonstration of India’s self-sufficiency to produce an aircraft carrier warship will reinforce the country’s defence indigenisation programmes and the ‘Make in India’ campaign.
INS Vikrant, built at a cost of around Rs 20,000 crore, successfully completed its fourth and final phase of sea trials last month. With the construction of ‘Vikrant’, India has joined a select group of nations having the niche capability to indigenously design and build an aircraft carrier.

The ship has over 2,300 compartments, designed for a crew of around 1,700 people, including specialised cabins to accommodate women officers.
INS Vikrant has a top speed of around 28 knots and a cruising speed of 18 knots with an endurance of about 7,500 nautical miles. The aircraft carrier is 262 metres long, 62 metres wide and it has a height of 59 metres. Its keel was laid in 2009.
Further in the address, he also underscored the country’s responsibility for chairing the G20 summit this year.
“This year, India has also got the prestigious responsibility of chairing the G20 group. I had also discussed this in detail last time,” he said.
G20 is the premier forum for international economic cooperation representing around 85 per cent of the global GDP, over 75 per cent of the worldwide trade, and about two-thirds of the world population.

On December 1, Prime Minister Narendra Modi said India’s agenda for the G20 will be inclusive, ambitious, and action-oriented. In his blog post, PM Modi said India will work to promote a universal sense of oneness and its priorities will be shaped not only in consultation with G20 partners but also with the Global South.
He underlined that the great challenges of today like climate change, terrorism, and pandemics, cannot be solved by fighting each other but by acting together. “India’s G20 agenda will be inclusive, ambitious, action-oriented, and decisive,” he wrote.
Citing the theme – ‘One Earth, One Family, One Future’, PM Modi said India’s G20 Presidency will work to promote this universal sense of one-ness. “This is not just a slogan. It takes into account recent changes in human circumstances, which we have collectively failed to appreciate,” he said.
Writing for the think tank South-South Research Initiative (SSRI), Farjana Sharmin noted India finally got the opportunity to execute its global vision and grand strategy, and secondly, South Asian region is going to get benefits through India’s leadership in G-20.
PM Modi also extended his greetings on the occasion of Christmas.
He said: “Today is the day to remember the teachings of Jesus Christ. The festival of Christmas is being celebrated with great fervour all across the world. I extend my heartful greetings to everyone.”
On December 13, PM Modi had invited people to share their inputs for this episode of Mann ki Baat and urged them to write on the NaMo App, and MyGov app or record their messages on 1800-11-7800.
Sharing MyGov’s invitation, Prime Minister Narendra Modi had tweeted, “2022’s last #MannKiBaat will take place on the 25th of this month. I am eager to receive your input for the programme. I urge you to write on the NaMo App, MyGov or record your message on 1800-11-7800.” (ANI)