3 Dead At Chandrababu Naidu Event, Second Stampede In Less Than A Week

This is the second occasion in a span of four days when people lost their lives at programmes of Mr Naidu, who has been holding a series of political meetings 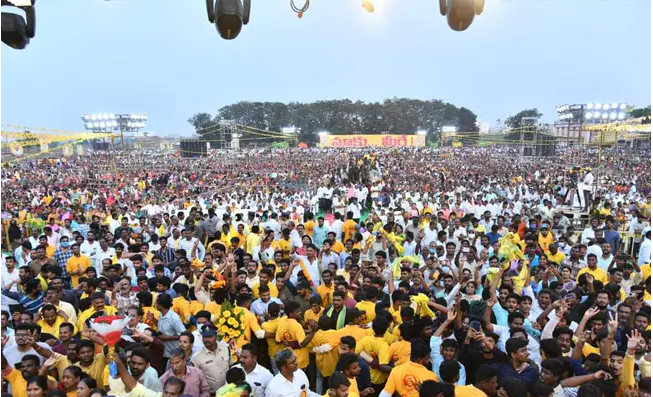 Three women have died in a stampede at a rally of Telugu Desam president and former Chief Minister Chandrababu Naidu in Andhra Pradesh’s Guntur district. This is the second incident in a span of four days that people lost their lives at a public event of Mr Naidu’s Telugu Desam Party, which has been holding a series of political meetings across the state in preparation for the 2024 assembly elections in the state, reported NDTV.

Mr Naidu said the incident was extremely unfortunate and announced a compensation of ₹ 5 lakh for each of the families that have lost their loved ones.

A top police officer from Andhra Pradesh told NDTV the public meeting had been completed and Mr Naidu had left the venue for his residence when the tragedy took place, said NDTV report.

After the public meeting, there was a programme by local Telugu Desam Party leaders to distribute sarees as gifts from Chandrababu Naidu to the women for Sankranti, the harvest festival coming up in two weeks.

“Some 4,000 women had gathered to get the Chandrababu Sankranti Kanuka. Barricades had been erected, so queues could be maintained. On the other side, dinner packets were being distributed. Suddenly a barricade gave way and the stampede happened,” the officer told NDTV.

The police chief of Guntur told reporters that enough police protection given to the programme.

“200 policemen and rope parties were deployed.  The incident happened because of the barricade collapse at the first counter… the deputy superintendent of police was on theb spot at the moment and has rescued a few women,”he added.

On Wednesday, eight people — one of them a woman — died in a near-stampede in Nellore district during a roadshow by the former Chief Minister. Several people fell in an open canal as locals in Kandukur waited for a glimpse of Mr Naidu, who was coming there for a roadshow.

Mr Naidu had immediately cancelled the meeting and announced a compensation of ₹ 24 lakh to the families who have lost their loved ones. Mr Naidu had subsequently continued with his political meetings, which came in for criticism.

Leaders of YSR Congress said off the record that the stampede occurred due to the delay in distribution of the Sankranti Kanuka kits. The people were waiting for hours and became restless, they alleged.

Chief Minister Jagan Mohan Reddy has blamed the Telugu Desam Party chief for the deaths, saying his “publicity mania” caused the tragedy, and demanded an immediate and public apology. Today, he expressed shock over the stampede in Guntur. The officials have been directed to provide all possible medical assistance to the injured. He has assured that the government support to the families.

The state unit chief of TDP, Kinjarapu Atchen Naidu, blamed the state government for not making “proper” security arrangements to manage the crowd.

Mr Reddy’s party has been under pressure since Mr Naidu had stepped up the pace of his rallies and political meetings. The massive crowds at his programmes are seen as an indication of the resurgence of the TDP, which faced a crushing defeat before the YSR Congress in 2019.

Mr Naidu has said the 2024 elections will be his last if people did not elect his party back to power.

Mr Naidu’s son, Nara Lokesh, will soon start a foot march that’s expected to be a youth platform. The 400-day march, which will cover more than 4,000 km, begins from January 27.