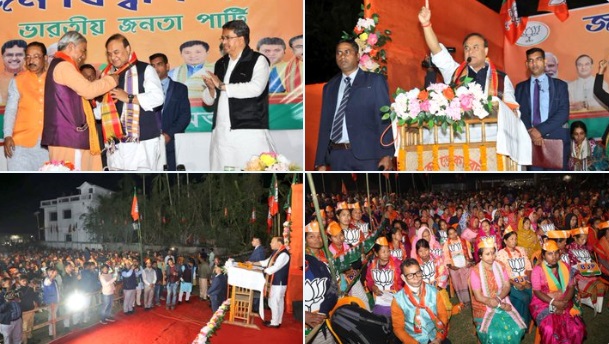 Assam Chief Minister Himanta Biswa Sarma today exuded confidence that BJP in Tripura would win over 50 seats in the 60-member Assembly elections to be held soon.

Addressing two mega rallies in Gomati and Udaipur in Tripura, the Assam CM who is also the NEDA (North East Democratic Alliance) Convenor gave a clarion call to the people of poll-bound to ensure that BJP is voted back to power with a clear majority.

With Tripura CM Manik Saha by his side, CM Sarma first addressed a gathering at Killa in Gomati. The BJP master strategist lashed out at the CPI-M terming the party redundant across the nation.

Starting his campaign from an area which has majority tribal population, the NEDA Convener urged the people of Tripura to give the BJP another chance to ensure that the mega development initiatives taken in the last 5 years continue unabated.

CM Sarma further said that the CPI-M’s red flag is soaked with the blood of the poor and it was the BJP which ended Gunda-raj (era of violence) and Chanda culture (forceful donations) in Tripura.

Highlighting Tripura’s development journey, NEDA Convener Sarma said that Tripura has progressed the most in Northeast in the last 5 years. The Assam Chief Minister lauded his Tripura counterpart Manik Saha for the welfare initiatives including the recent hike in DA of government employees and proper implementation of Prime Minister Narendra Modi’s pro-poor initiatives.