Tripura 2023 polls: Who will be BJP’s main rival? Ex-CM Biplab Kumar Deb has the answer

Briefing newspersons, Biplab Kumar Deb said that the CPI-M has 15 seats in it's kitty besides having a party base in almost every part of the state. 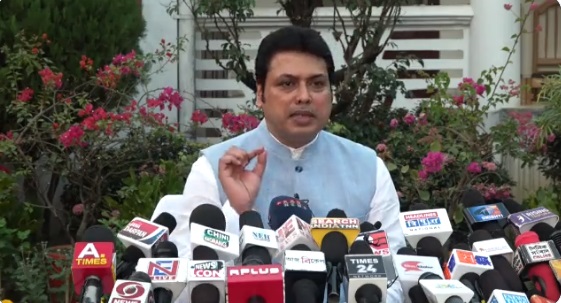 Who will be the BJP’s main opposition in the 2023 Tripura assembly elections? Well, former Chief Minister and Rajya Sabha MP Biplab Kumar Deb has an answer to this. Deb who was in Agartala yesterday said that the Left (CPI-M) is the main rival for the Saffron Party as far as the upcoming elections are concerned.

Briefing newspersons, Biplab Kumar Deb said that the CPI-M has 15 seats in it’s kitty besides having a party base in almost every part of the state.

But Biplab Deb has a different perspective as far as the presence of Congress and other parties are concerned. Deb remarked that the Grand Old party as well as other forces are not a factor since they have no existence in Tripura. Deb added, “Nobody votes for the 3rd party here (Tripura).

Referring to a meeting in Belonia where he had interacted with the voters to know their opinion ahead of the polls, Deb said that during his interaction it was clear that the people would vote for BJP even if they were given the choice of other parties including the Congress and the Left.

The former Tripura Chief Minister believes that such is the situation because of the untiring efforts made under the able leadership of Prime Minister Narendra Modi to usher development.

When asked about the prospects of regional forces in the upcoming elections, Biplab Kumar Deb while referring to the INPT, TUJS and IPFT said that rise and fall of a party is part of the game and people are well versed with the activities and leadership of such parties.