A decision is expected to be taken in presence of the BJP central leadership. 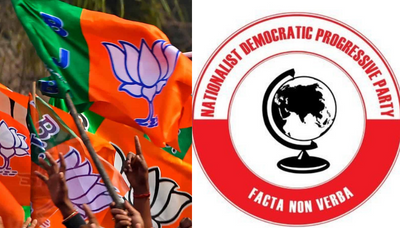 BJP and NDPP (Nationalist Democratic Progressive Party) would finalise the seat sharing plan for the upcoming Nagaland elections in New Delhi by January 18-19.

A decision is expected to be taken in presence of the BJP central leadership.
This was informed by NEDA convenor and Assam Chief Minister Himanta Biswa Sarma, when he was asked about the crucial meeting chaired by him between leaders of the BJP and NDPP, last night.

Himanta Biswa Sarma said, “There was discussions between us (BJP) and NDPP in Nagaland. It will be finalized in New Delhi on Jan 18-19. It was a meeting for the Nagaland election.”

Speaking about Tripura and Meghalaya elections he said, “The works (regarding elections in Meghalaya and Tripura) are underway there. There was something left regarding Nagaland, it has got over nicely.”

Both, the BJP and the NDPP in July last year had announced that they will jointly contest the 2023 Assembly election in Nagaland. It was decided that the NDPP will contest in 40 seats and BJP on 20 seats.
“The leadership of the two parties led by BJP President JP Nadda and Chief Minister Neiphiu Rio of the NDPP have mutually agreed to continue the alliance with seat sharing in the forthcoming elections to the Nagaland Legislative Assembly of 40:20, wherein the NDPP will contest in 40 seats and the BJP will contest in 20 seats. There will be no friendly contest in any constituency,” the joint statement said.