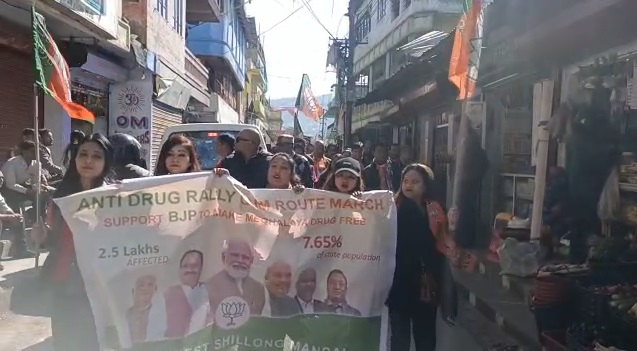 A sea of people joined the Meghalaya BJP’s War on Drugs as state president Ernest Mawrie led a massive rally in the 18 West Shillong constituency today. People from different walks of life as well as age groups participated in the rally to express their solidarity to the War Against Drugs.

Slogans of Say No To Drugs reverberated the air as the rally marched ahead from Mawbah (Barapathar) Taxi Stand and culminated at Nongsohphoh.

It may be mentioned that the BJP had kick-started the Anti-Drugs drive in East Shillong constituency on December 30 sending out a clear message of Waging a War against Drugs and Addiction.

It was during this time, that a 8-point proposal to counter the drug menace in the state was also launched by the BJP.

Setting up of a Northeast Anti-Drug squad

Establishing a Directorate of prosecution in Meghalaya

Regular counseling in schools and colleges

Engaging Anti-drug volunteers at the booth-level

Toll-free assistance for those seeking treatment

It needs to be mentioned, the Saffron Party has taken up “The ‘Mission Goal’ programme not only for election, but will be continued after the polls as well,” Meghalaya BJP President Ernest Mawrie had said.

As per available data, Meghalaya has nearly 2.5 lakh drug users, which is 7.65% of the state population.