Nepal’s Tara Air flight with 22 on board goes missing

Wancho community which relies heavily on subsistence agriculture, lacks awareness of the latest trends, and technologies in farming.

The body of Late Tamik Taki was found under mysterious circumstances at Siang River near Jido Village in Upper Siang District.

Arunachal: AAPSU elections delayed by a…

It is to be mentioned that the AAPSU elections have been marred by incidents of violence in the last few days.

The landslide occurred at 10 pm on Sunday in Itanagar. Arunachal State Police team along with NDRF personnel are at the site. 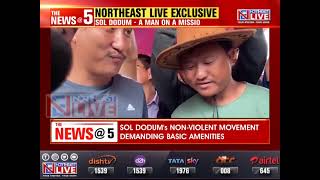 Anti-corruption crusader | Where there is a will, there is a way – these words hold true even today, and the man who has stayed firm to this mantra is Arunachal’s very own Sol Dodum whose non-violent movement will now ensure the people of his hometown Seppa in East Kameng are not deprived of the […]

AAPSU Polls: Scuffle breaks out during…

Arunachal : Resistance to insurgency in…

After facing the wrath of insurgency for decades, finally it seems that the people of the Tirap – Changlang – Longding(TCL) districts of Arunachal Pradesh has decided to go for all out protests against insurgents groups and their illegal activities.It might be mentioned that Arunachal Pradesh which does not have any home grown terror outfit […]