He not only read the Malayalam words from his phone, but also did the translation for the guests who couldn’t understand the language.

Love can overcome any barrier and it has its own language. An endearing video of an African-American man intoning the wedding vows for his Malayali bride in Malayalam which is her native language is winning the hearts of netizens across the world.

The video was shared by Jenova Juliann Pryor on Instagram two days ago with the caption “My husband learned and said part of his wedding vows in my native tongue, Malayalam. I cried so hard,” reads the caption.

Danzel A Pyror exchanged wedding vows in both Malayalam and English. He read the wedding vows on the phone leaving his Malayali wife with tears of joy.

It can be seen in the video that; the groom starts his vows in English but soon switches to bride’s native language. “I have found my wife,” he says. “I am gonna speak a little Malayalam here,” then he translates the vows in Malayalam.”

“I have found a favor from the Lord. I love you,” he further says while the guests cheer and clap in the background.

He not only read the Malayalam words from his phone, but also did the translation for the guests who couldn’t understand the language. The video also shows the guests hooting and cheering in the background while his bride Jenova gets emotional and wipes away her tears of joy.

The clip has garnered tons of reactions from Instagram users. People adored how Danzel spoke Malayalam with utmost clarity, with one saying, “Malayalam, known as the toughest language spoken simply with clarity. Superb.”

“Wow, such a sweet gesture,” another commented. Many even wished the couple a “happy married life.”

Rebel Shiv Sena MLAs of the Eknath Shinde camp will hold a meeting today in the afternoon to discuss the further plan of action.

The 54th Asian Bodybuilding and Physique Sports and Championship is slated to be held from July 15 to 21, 2022 in Maldives.

The reason for the bus accident as indicated by the driver is assumed to be a brake failure but has not yet been confirmed. 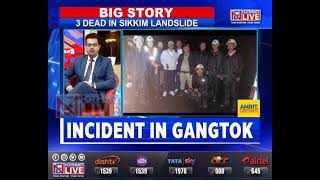 #Sikkim | 𝐋𝐚𝐧𝐝𝐬𝐥𝐢𝐝𝐞 𝐤𝐢𝐥𝐥𝐬 𝟑 𝐢𝐧 𝐆𝐚𝐧𝐠𝐭𝐨𝐤 | Three persons including 2 minors lost their lives after their house was swept away by landslide following heavy downpour in Gangtok. One of the deceased has been identified as Doma Sherpa.