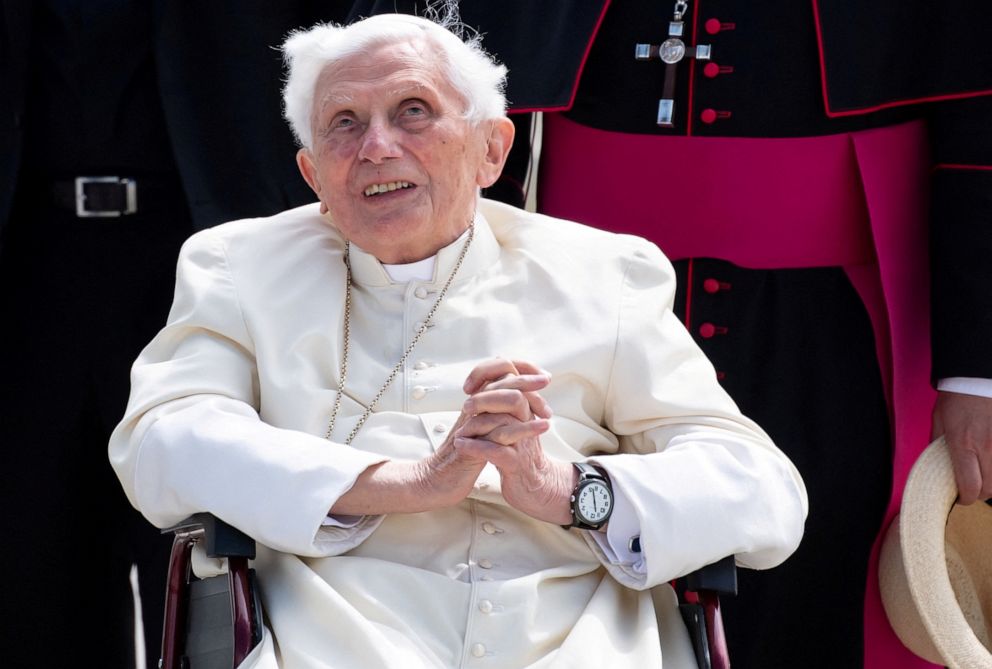 Pope Emeritus Benedict XVI ‘s health has worsened over the past hours due to advanced age and doctors are constantly monitoring his condition, the Vatican said Wednesday, as Pope Francis appealed to the faithful to pray for his “very ill” predecessor “until the end.”

Vatican spokesperson Matteo Bruni said Francis went to visit the frail, 95-year-old Benedict in the monastery on Vatican grounds where he has lived since retiring in February 2013.

“Regarding the health condition of the emeritus pope, for whom Pope Francis asked for prayers at the end of his general audience this morning, I can confirm that in the last hours, a worsening due to advanced age has happened,” Bruni said in a written statement.

“The situation at the moment remains under control, constantly monitored by doctors,” the statement said.

At the end of his customary Wednesday audience with the public in a Vatican auditorium, Francis departed from his prepared remarks to say that Benedict is “very ill” and asked the faithful to pray for the retired pontiff.

“I would like to ask you all for a special prayer for Pope Emeritus Benedict, who is sustaining the church in silence,” Francis said. “Remember him — he is very ill — asking the Lord to console him and to sustain him in this testimony to love for the church, until the end.”

After the hour-long audience, “Pope Francis went to the Mater Ecclesiae monastery to visit Benedict XVI. Let us all unite with him in prayer for the emeritus pope,″ Bruni said.

Benedict, who was the first pontiff to resign in 600 years, has become increasingly frail in recent years as he dedicated his post-papacy life to prayer and meditation.

When Benedict turned 95 in April, his longtime secretary, Archbishop Georg Gaenswein, said the retired pontiff was in good spirits, adding that “naturally he is physically relatively weak and fragile, but rather lucid.”

Francis also paid a visit to Benedict at the monastery four months ago. The occasion was Francis’ latest ceremony elevating churchmen to cardinal rank, and the new “princes of the church” accompanied him to the monastery for the brief greeting.

The Vatican released a photo at the time that showed a very thin-looking Benedict clasping Francis’ hand as the current and past pontiff smiled at each other.

In his first years of retirement, Benedict attended a couple of cardinal-elevating ceremonies in St. Peter’s Basilica. But in recent years, he wasn’t strong enough to attend the long service.

He was elevated to cardinal’s rank in 1977 by the then-pontiff, Paul VI. As Cardinal Joseph Ratzinger, the German prelate and theologian long served as the Vatican’s doctrinal orthodox watchdog. He was elected pontiff in 2005.

Benedict startled a room full of Vatican prelates by announcing, in Latin, in February 2013 that he would step down as pope in two weeks. Some church traditionalists were dismayed by his decision.

Francis has praised Benedict’s decision as a courageous acknowledgement that physical frailty no longer left him able to fully serve the world’s 1.3 billion Catholics.

Given his own health history, including a knee ligament problem that has forced him to use a wheelchair or a cane, Francis has said that retirement is something he’d consider, if the situation warranted it.

In an interview earlier this month with Spanish newspaper ABC, Francis revealed that shortly after fellow cardinals elected him to succeed Benedict in the papacy, he wrote a resignation letter to have on hand in case medical problems impeded him from carrying out his duties.

But in the same interview, Francis played down his mobility challenge, saying one governs with the head, not the knee.

“My thoughts are with the emeritus pope,” Baetzing told German news agency dpa. “I call on the faithful in Germany to pray for Benedict XVI.”

In Berlin, Chancellor Olaf Scholz “wishes the German pope, as we say, a good recovery and his thoughts are with him,” government spokesperson Christiane Hoffmann said during a regular government news conference.

Also Read : 3 Indian-Americans Including a Woman Walking On a Frozen Lake Fall Through, Die