Rupsi Airport in Assam gets regular flight under RCS-UDAN

Regular flight services began at Rupsi airport in Assam from Saturday as part of the government’s endeavour to link under-served and unserved airports through regional connectivity scheme routes, Airports Authority 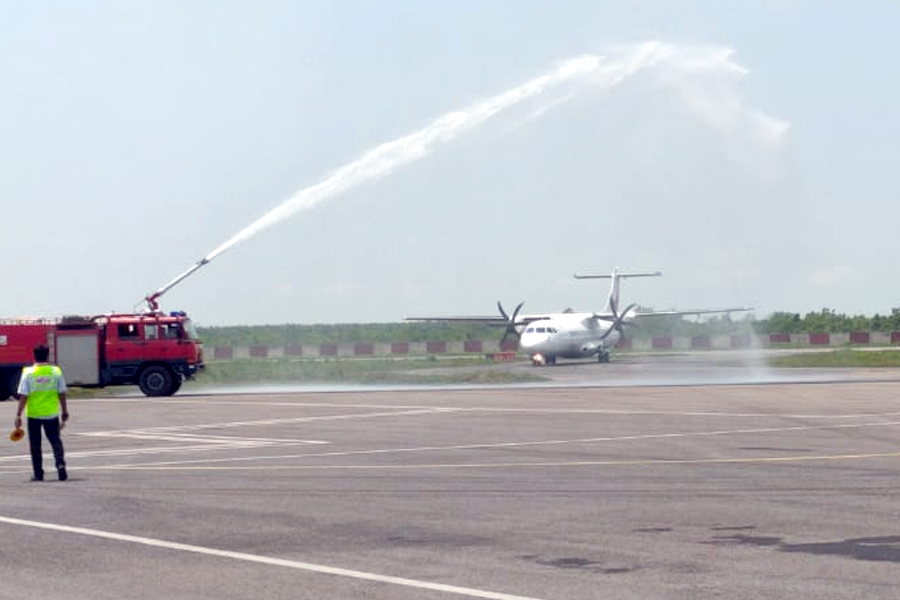 The Rupsi airport located near Dhubri district became operational after 38 years and will benefit the travellers of Western Assam districts – Dhubri, Kokrajhar, Chirang and Bongaigaon.

The first commercial flight of Flybig airline on Guwahati-Rupsi-Kolkata route with 24 passengers on board landed today at 12:07 pm marking the beginning of new era at Rupsi in Assam and its adjoining areas, an AAI release said.

Upon arrival from Guwahati, water cannon salute was accorded to the incoming flight by the Rupsi Airport officials as a gesture of welcome to the flight and the passengers were welcomed with the traditional Gamosa (scarf) before the flight departed for Kolkata.

On May 5, the airline had conducted a successful trial of its flight at the airport.

AAI has re-developed this world war-II era air strip in Assam at an estimated cost of Rs 69 crore and the foundation stone for it was laid by chief Minister Sarbananda Sonowal in February 2019. Spread across 337 acres, the newly developed airport has a terminal building measuring 3,500 sq m and is equipped with 10 check-in counters, an AAI release said, adding, the terminal is designed to manage about 200 passengers during peak hours.

A trial flight was tested and operational requirements were checked successfully on May 5.

Under the RCS-UDAN scheme affordable flying will be ensured for all, specially the lower income group population over short distances, the airport in-charge Jyotirmoy Barua said.

Fly big airline was awarded routes under UDAN scheme to operate flight service at Rupsi by the ministry of civil aviation through a bidding process to operate flights on Guwahati- Rupsi-Kolkata route and back, the AAI said.

Initially it will operate on Tuesdays, Thursdays, Saturdays and Sundays, the airlines sources said.

The operationalisation of Rupsi Airport will help boost the local economy of the Bodoland area and provide better connectivity to air travellers of Dhubri and adjacent districts of Bongaigaon, Kokarajhar, Goalpara as well as districts in the neighbouring states of Meghalaya, West Bengal and parts of Bhutan, AAI said.