Home  ⁄  topnews   ⁄   PM Modi spends over an hour with mom in hospital, Heeraba to be released in a day or two

PM Modi spends over an hour with mom in hospital, Heeraba to be released in a day or two

Heeraba, 100, was admitted to a super-speciality hospital in Ahmedabad on Wednesday due to some health issues 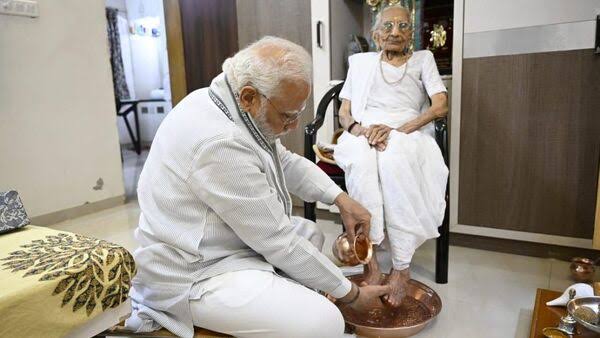 Prime Minister Narendra Modi’s mother Heeraba, 100, would be released soon, doctors attending on her said. Heeraba was admitted to U N Mehta Institute of Cardiology and Research Centre, a super-specialty hospital in Ahmedabad on Wednesday due to some health issues.

“Heeraba’s health is good. Her health is improving rapidly. She is likely to be discharged in a day or two. Oral diet started yesterday night,” the hospital statement read.

PM Modi flew from Delhi on Wednesday afternoon to meet his mother in the hospital. He spent over an hour with her. The PM flew in from Delhi around 4 pm, and he left the hospital just before 5.30 PM.
The Prime Minister has always spoken about his bond with his mother and has been visiting her frequently after he became the PM.

Heeraba lives in Raysan village near Gandhinagar city with PM Modi’s younger brother Pankaj Modi. PM Modi met Heeraba at her residence on December 4 when he was in Gujarat for the state assembly election campaign. Heeraba was last seen in public on December 5 when she cast her vote in the second phase of Assembly polls.

Gujarat Chief Minister Bhupendra Patel and other senior Gujarat BJP leaders visited the Ahmedabad hospital to inquire about her health.

Congress leader Rahul Gandhi too had tweeted PM Modi and conveyed his best wishes and prayers for Heeraba’s speedy recovery.