Oil India Limited had received a demand for ransom of Rs 75 lakh US dollars right before the company’s servers were hacked. This was stated in the FIR filed by

Oil India Limited had received a demand for ransom of Rs 75 lakh US dollars right before the company’s servers were hacked.

This was stated in the FIR filed by the company in relation to the hacking case. As per the FIR copy, the demand for ransom came from international hackers to one of the company’s computers right before the servers were hacked.

The police have sought the assistance of the Crime Branch, Assam Police, to crackdown on the cyber hackers who targeted OIL’s servers.

Top OIL officials told Northeast Live that the hackers targeted its servers with malware attacks severely impacting IT operations. The official said the hackers could be from within the country or abroad.

The company is in touch with top cyber security experts to thwart possible damage and has already undertaken measures such as discontinuing its computer systems from larger in-house networks.

The OIL official, however, said that crude production has not been hit yet. While OIL India has termed the cyber attack as extremely serious in nature, the situation is being closely monitored. 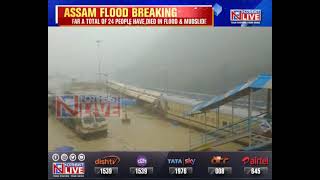 Arunachal Pradesh Chief Minister Pema Khandu on Thursday said that he has tested negative for COVID-19 after undergoing a repeat test. Samples of the Chief minister for RT-PCR test was sent for test yesterday. Chief Minister Khandu took to Twitter to confirm the development. Earlier, the Arunachal Pradesh Chief minister tested positive on September 15. […]

Fresh inputs have come to the fore from the sensational murder of an elderly woman in Guwahati on February 7. The sister of the victim, who rushed from Tezpur, suspects the murder was likely committed for her property. As per the latest reports, Ashray, the accountant of the victim has been absconding. Reports suggest that […]

The Assam government under Chief Minister Himanta Biswa Sarma is carrying on with its crackdown against corruption. After a crackdown on land brokers, now the authorities are carrying on a tirade against illegal petitioners who file unauthorised petitions, frame FIRs outside police stations in lieu of money. With this intention, authorities zeroed in on persons […]

Prime Minister Narendra Modi is all set to visit Tripura on January 4, 2022, to inaugurate a new terminal building of Maharaja Bir Bikram Airport at Agartala. Union Civil Aviation Minister Jyotiradiya Scindia and other senior officials of the Airports Authority of India would also be present at the programme along with the Prime Minister. […]