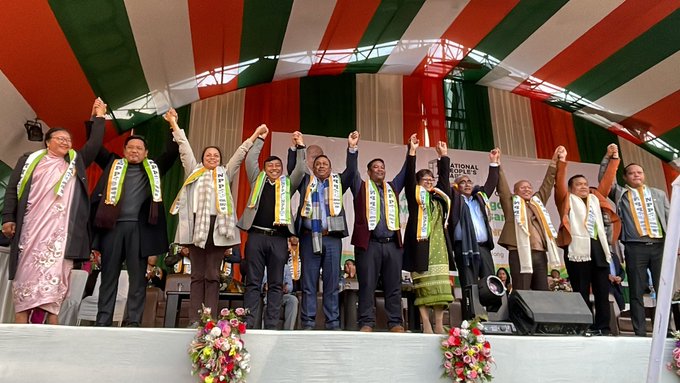 Ampareen Lyngdoh and Mohendro Rapsang, who joined the National People’s Party (NPP) on Monday have been named as the party’s candidates from East and West Shillong seats.

Lyngdoh and Rapsang had resigned from Congress party yesterday

NPP also announced the candidature of Jasmine M Lyngdoh from Nongthymmai, Teibor Pathaw from Mawlai, Ransom Sutnga from North Shillong and Rocky Hek from Pynthorumkhrah for the upcoming elections.

NPP had on December 3 announced Former Meghalaya Legislative Assembly Speaker and former Congress leader, A.T. Mondol as its candidate from the Phulbari constituency.

The announcements were made by Meghalaya Chief Minister and NPP leader Conrad Sangma.

Earlier on December 6, the United Democratic Party (UDP) announced its first list of 32 candidates for the upcoming elections.

On December 12, the newly formed political party in the state, the Voice of the People Party (VPP) also released its first list of 14 candidates.

The Meghalaya Trinamool Congress (TMC) is all geared for the 2023 elections. Party supremo Mamata Banerjee recently sounded the poll bugle in the state and attended public rallies and interacted with party workers. The party is likely to announce its candidates list by December 25.

The Nationalist Congress Party (NCP) is already in talks with the People’s Democratic Front and is aiming for a pre-election coalition.

The election to the 60-member Meghalaya Assembly is likely to held by February 2023 as the term of the present Assembly would end on March 23, 2023.

Also Read: Who will be TMC’s CM candidate in Meghalaya? Party likely to announce candidate list by Dec 25