Communal tensions have gripped Bangladesh over the past few days following allegations of the Quran being dishonoured at a puja pavilion in Cumilla on October 13, triggering violence in several 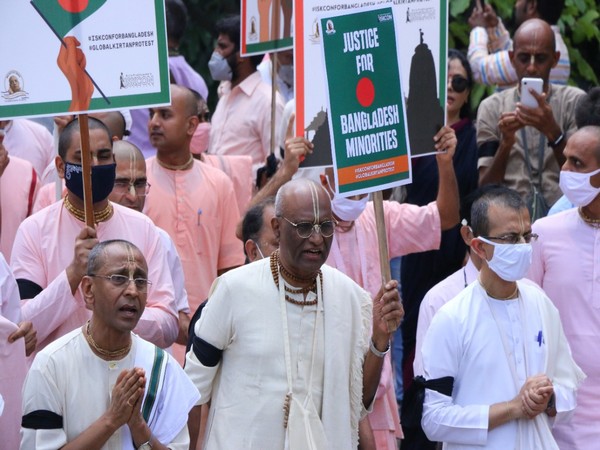 Communal tensions have gripped Bangladesh over the past few days following allegations of the Quran being dishonoured at a puja pavilion in Cumilla on October 13, triggering violence in several districts across the country.

Followers of the International Society for Krishna Consciousness (ISKCON) held a peaceful march on Saturday in Hare Krishna Hill area of Bengaluru to condemn the attack on Hindu minorities in Bangladesh. Similar scenes were witnessed in Pune, Guwahati as followers gathered for justice for the victims.

An ISKCON temple in Noakhali city in Bangladesh was vandalised and a devotee was killed by a mob on October 16. Protest in Pune is a part of a worldwide protest organised by ISKCON at about 700 ISKCON temples across 150 nations on Saturday. Posters reading ‘Justice for Bangladesh minorities’ and ‘Protect our temples in Bangladesh’ were spotted at the protest.

Madhu Pandit Dasa, President, ISKCON Bangalore said, “We express our pain and anguish on the unprovoked attacks on the ISKCON devotees, Hindus, and other minorities in Bangladesh. We unitedly stand in support and solidarity with them and pray for their safety and well-being.”

ISKON has appealed to the Government of Bangladesh to immediately ensure the protection of the affected minorities and take steps to prevent such incidents in the future. We also request the Government of India to work with our neighbouring countries and protect the rights of minorities in the region.

ISKCON Bangalore had also organised a peaceful march to express solidarity with the persecuted minorities of Bangladesh, said ISKON in its official press release. The missionaries of the temple, ISKCON congregation members and other conscientious citizens participated in the event.

At least four people were killed in police shootings during the attack on Puja locations in Chandpur’s Hajiganj on October 13 and in Noakhali’s Choumuhani, attacks on Hindu temples left two people dead on October 15.