India’s total active caseload has dropped to less than 1.7 lakh (1,69,824) on Saturday, according to the Ministry of Health and Family Welfare (MoHFW). The Ministry said that the present 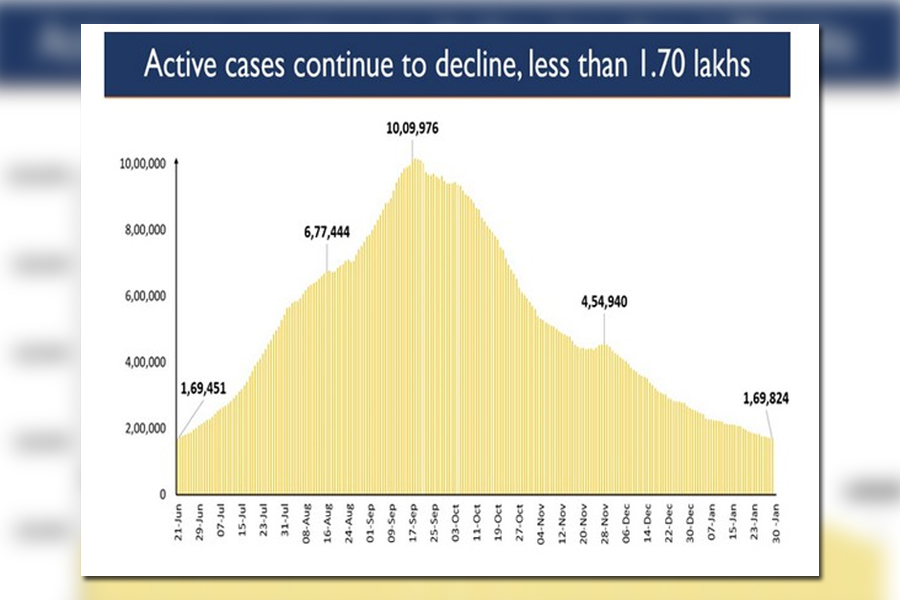 India’s total active caseload has dropped to less than 1.7 lakh (1,69,824) on Saturday, according to the Ministry of Health and Family Welfare (MoHFW).

The Ministry said that the present active caseload now consists of less than 1.6 per cent, which is just 1.58 per cent of India’s total positive cases.

Moreover, 27 States and UTs have a weekly positivity rate less than the national average.
“With a consistent rise in cumulative recoveries, India’s recovery rate has reached nearly 97 per cent (96.98 per cent),” said the Ministry, while adding that it is one of the highest globally.

The Ministry said that India has also significantly scaled up its COVID-19 inoculation drive and over 5.7 lakh people have been vaccinated successively for the last 2 days.

Moreover, 85.10 per cent of the new recovered cases are observed to be concentrated in 10 States and UTs.

Kerala has reported the maximum number of single-day recoveries with 6,398 newly recovered cases. 2,613 people recovered in Maharashtra in the past 24 hours followed by 607 in Karnataka.

“Kerala continues to report the highest daily new cases at 6,268. It is followed by Maharashtra with 2,771, while Tamil Nadu reported 509 new cases”, it added.

As many as 137 deaths recorded in the last 24 hours and seven States and UTs account for 83.94 per cent of the new deaths. Maharashtra saw the maximum casualties at 56, followed by Kerala with 22 daily deaths and Punjab with 11. (ANI)