In a story that exemplifies the age hold communal harmony existing in Assam Motibur Rehman, coming from a Muslim community, is taking care of the 500-year-old antique Shiva temple in 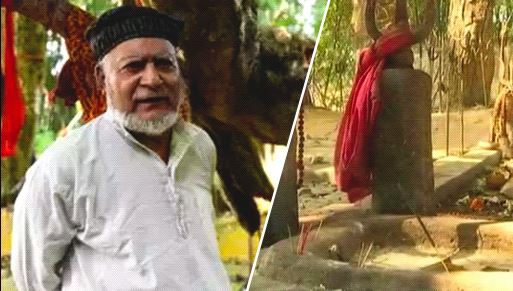 In a story that exemplifies the age hold communal harmony existing in Assam Motibur Rehman, coming from a Muslim community, is taking care of the 500-year-old antique Shiva temple in Amingaon, Assam.

Rehman has spent his last 60 years of life looking after the temple. The temple located in Rangamahal near Amingaon, Assam, has now turned into a major attraction for locals and tourists.

Although the temple is well-known in the state, very few people are aware that it is being cared for by a Muslim family.

Motibur Rehman’s family has been looking after this temple for decades now taking care of its temple and nearby areas. It all started from his great grandfather, ‘Nana’ when a man called Borantha handed over a Shiva Linga to place it there. Nana started to take care of the temple and started offering prayers at the Shiva temple which has been carried forward by the Rehman family till date.

Since then, it started attracting devotees from near and far who would visit and offer their prayers in front of the Shiva Linga. It is to be mentioned that the Shiva temple not only attracts devout Hindus. Believing in its divine nature Muslims also perform namaz at the Shiva temple.

Legend has it that around 1956–57, an individual known as Bura Babu, used to visit the temple and sit near the Shiva Linga. As it is believed that Lord Shiva loves  “bhang,” Bura Babu would rub cannabis leaves on the Shiva Linga. Miraculously smoke would start emanating from the Shiva Linga spreading the legend of the temple.

The locals of Rangamahal where the Shiva temple, a pinnacle of Hindu-Muslim harmony in Assam prouldly claim it as their own.

In times when the religious divide gets more attention, the Rehman family’s quite actions do give hope that Assm’s syncretic heritage is not lost and that Hindu Muslim harmony still remains a core ethos of the Assamese society.