HM Shah arrived in Assam on Sunday night at LGBI Airport and was received by Assam CM Himanta Biswa Sarma and other ministers.

Union Home Minister Amit Shah has reached Mankachar where he is inspecting the Indo-Bangla border and also held a meeting with the security forces around.

Following this, Home Minister Shah will be laying the foundation stone of the state-of-the-art armoury of the Border Security Force in Tamulpur where he will also launch the Khadi and Village industries products at Kalcheni.

Later in the day, Home Minister Shah will inaugurate the office building of the Directorate of Census operations at Amingaon in Kamrup and will also virtually inaugurate the SSB buildings.

Around 6 PM, the Union Home Minister will be inaugurating the new super-speciality hospital for Cardio and Neurology at GMCH.

On 10 May, the Union Home Minister Shah will confer the President’s Colour Medal to the Assam Police at a special parade at the Nehru Stadium in Guwahati. And, later, he will attend the one-year anniversary of the Himanta Biswa Sarma-led Assam Government.

In the first major large-scale reshuffle of bureaucrats after the BJP returned to power for a second term, the Assam government on Sunday replaced deputy commissioners of 20 districts. The move comes two days after 38 officers in the rank of superintendent of police were transferred across the state. As per an order issued by […]

For the first time in two years, no Covid-19 cases were reported from Assam on Thursday and Friday. A total of 1,458 tests were conducted in the state on Friday out of which no positive case of the infection was reported. The state’s latest recovery rate is 98.89 per cent. State Health Department officials have […] 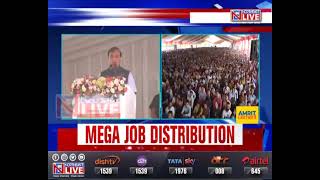 Mega Appointment Ceremony | In a big step towards addressing unemployment, Assam Chief Minister Himanta Biswa Sarma launched a mega appointment letter distribution ceremony. As many as 23 thousand young boys and girls have been given jobs in at least 11 departments of the state. These include education, water resources, social work, PHE and Public […]

The Nagaland Legislative Assembly on Monday referred the Securitisation and Reconstruction of Financial Assets and Enforcement of Security Interest Act (SARFAESI), 2002 to a select committee, contending that provisions of the legislation were in conflict to Article 371A of the Constitution. The article states that no act of Parliament shall come into effect in Nagaland […]

Dr Anindita Priyadarshini Das has bagged four gold medals at the 8th Women and Men Open Masters Commonwealth Powerlifting Championship at Newfoundland in Canada. 52-year-old Anindita won the four golds in the women’s power lifting section. A mother of two and a gynaecologist by profession, Anindita is the first women body builder from Dibrugarh and […]