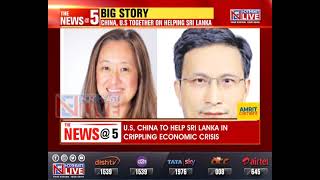 Wickremesinghe (if named) will likely be at the head of a 'unity' government with cross-party support in the 225-member Sri Lanka parliament.

India on Tuesday said that it is "fully supportive" of the island nation's democracy, stability, and economic recovery.

Sri Lankan cricket legends Kumar Sangakkara and Mahela Jayawardene have slammed the ruling government of the country after five people were killed and over 200 were injured in political violence. Sangakkara on Monday took to Twitter and wrote, “Peaceful protestors demanding for their basic needs and rights attacked by despicable thugs and goons backed by […]

The PM has sent his letter of resignation to his younger brother, President Gotabaya Rajapaksa, clearing the way for a "new unity government".

Sri Lankan Prime Minister Mahinda Rajapaksa resigned from his post today amid the country’s greatest economic crisis since independence. Meanwhile,Sri Lanka’s Health Minister Professor Channa Jayasumana has also submitted his letter of resignation to the President. Even as unrest and protests against the government grew, the Rajapaksa brothers – President Gotabaya Rajapaksa and Prime Minister […]

This is the country's largest hartal campaign and strike, organised island-wide 69 years after the major hartal that began in 1953.

Amid the escalation of tensions and economic crisis in Sri Lanka President Gotabaya Rajpaksa invited the opposition to take up ministerial berths in face of the crisis the island nation is going through. Earlier on Sunday all the cabinet ministers apart from president Gotabaya and Mahinda Rajpaksa resigned en masse with immediate effect. Among them […]