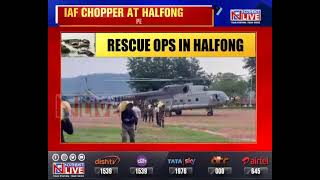 𝐈𝐀𝐅 𝐂𝐡𝐨𝐩𝐩𝐞𝐫 𝐚𝐭 𝐇𝐚𝐟𝐥𝐨𝐧𝐠 | Relief and rescue operations are continuing in flood hit Dima Hasao district. Today an Indian Air Force chopper landed in Haflong carrying 20 NDRF personnel and 1.5 tonnes of equipment. As per sources, about 56 stranded persons are set to be rescued from Dima Hasao today. Government and airforce along […]

However, Chief Minister Sarma informed that the stretch of road from Jatinga to Haflong is in a bad condition. 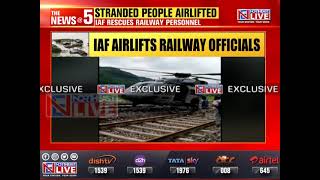 𝐍𝐨𝐫𝐭𝐡𝐞𝐚𝐬𝐭 𝐋𝐢𝐯𝐞 𝐄𝐱𝐜𝐥𝐮𝐬𝐢𝐯𝐞 | The Indian Air Force has airlifted nearly 13 of the total 35 railway officials and others stranded at the Daotuhaja station. Around 13 people were evacuated in the first sortie, while operations are underway to evacuate the rest. 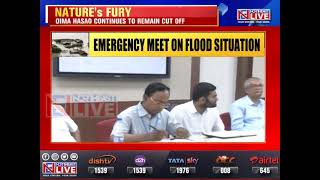 The IAF Chief assured the Arunachal Guv to take up the issue at the appropriate forum of the defense establishment for its redress.

India’s mission evacuation is underway on a war footing. The centre has deployed several aircraft of the Indian Air Force to assist in the ongoing evacuation of thousands of Indian citizens from conflict-torn Ukraine, which is embroiled in a war with Russia. IAF’s heavy-lift transport aircraft C-17 Globemaster took off for Ukraine around 4 am […]

Five cadres of the People’s Liberation Army (PLA), Manipur, who were arrested by Myanmar police at the Sagaing Region of northwestern Myanmar in August last year have been deported to India. The Indian Air Force (IAF) Flight carrying the five landed at the Imphal airport earlier on Wednesday. Also Read Assam-Meghalaya Border Row – Focus should […]

The mortal remains of Satpal Rai, the Personal Security Officer (PSO) of Chief of Defence Staff, General late Bipin Rawat, who was among the 13 who died in the Coonoor chopper crash will arrive at his residence today. The mortal remains will be taken from Baghdogra airport to Darjeeling. A pall of gloom has descended […]

Live Paramilitary deployed in Manipur’s Churachandpur after violent protests/h5>26th May, 2022 14:28