Locals resorted to setting up fires under the frozen pipelines to melt the water supply. 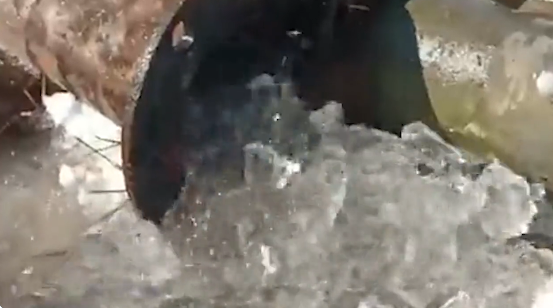 With mercury dropping to several degrees below freezing point in Kashmir, videos showed ice flowing out of water pipelines in Valley and large parts of Dal lake in Srinagar were frozen on Thursday.
In some areas locals resorted to setting up fires under the frozen pipelines to melt the water supply, an NDTV report said.

Kashmir is under the grip of ‘Chilla-i-Kalan’, the 40-day harsh winter which begins on December 21 and ends on January 30. This period is marked by frequent snowfall and several water bodies across the Valley being frozen.

Minimum temperature in the Valley remains sub-zero for last one month.

Qazigund and Kupwara recorded low temperatures of minus 6.2 degrees Celsius

Over the next few days, the region will continue to face dry weather and colder night. According to the India Meteorological Department snowfall is expected on Sunday and Monday.