While some internet users applauded Ms Singh's unique workout attire, others argued if it was okay for women to wear a saree instead of athleisure clothing for working out. 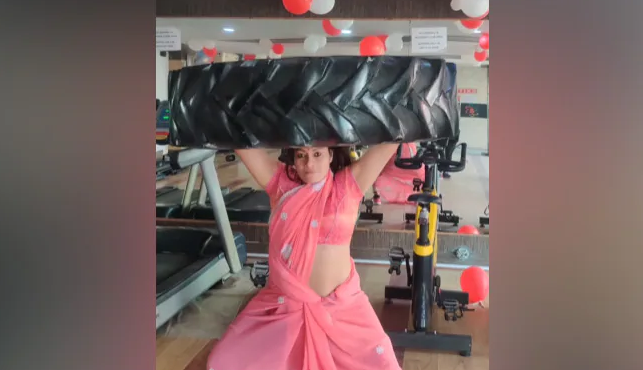 A video of a woman working out at the gym in a saree is gaining traction on social media and leaving internet users impressed. The short clip was posted on Instagram by a user named Reena Singh, a fitness freak who regularly posts workout-related content on her account.

“This is just the beginning,” Ms Singh wrote in the caption of her post which has accumulated more than 935,000 likes and over 33 million views.

Watch the video below:

In the video, Ms Singh is seen performing multiple exercises, such as lunges and lat pulldowns. She is also seen jumping and lifting a huge tire while performing squats.

Internet users were quick to react to her video. While some applauded Ms Singh’s unique workout attire, others, however, argued if it was okay for women to wear a saree instead of athleisure clothing for working out at a gym.

One user wrote, “The amount of injury you can have is not even explainable. Yes, peheno saree… par (wear saree…but) weights, machines, cross fit… needs comfortable gym wear. Be safe!” Another added, “Saree is okay but encourage them to wear gym wear to avoid injury. Some exercises can be performed but not all, like the first one. So, I feel you should encourage them to wear proper clothes to avoid injury.”

A third user commented, “Please don’t promote such videos… if people get inspired by it and try wearing such outfit, it can be very dangerous.”

A fourth added, “For the people asking “Why?” ask yourselves that – Instagram has gotten to the stage where to get noticed you do need to go beyond the ordinary/norm. As an influencer/artist or anyone simply posting what they actually do, does not get any views or comments. This post was visible because she is in the gym wearing a sari. So, it did work! And she has herself said that she did this for the reel, so kudos!”

Meanwhile, earlier a similar video surfaced online in which a 56-year-old woman from Chennai was seen working out in a saree. The video was shared on Instagram jointly by Humans of Madras and Madras Barbell. It showed the woman lifting heavy weights and dumbbells and various other gym machines and equipment, all of it while wearing a saree.