Trans Woman Removes Ears And Nostrils To Look Like A Dragon

Transgender Tiamat Eva Medusa, who identifies herself as a woman has undergone extreme body modifications even got her ears removed to look like a dragon 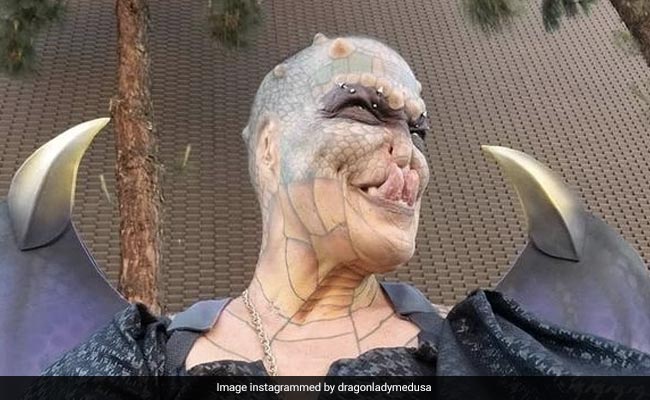 Some people are great pet lovers and cannot imagine a life without them. They often have more than one pet and connect at a deep level with them. But others take the idea to extremes and try to look like the animals they like. They are called “therians” – people who believe or feel they are nun-human animals. One such person is Tiamat Eva Medusa, who has undergone extreme body modifications – even getting her ears removed – to look like a dragon.

She keeps posting her photos on Instagram, where the former banker has nearly 25,000 followers.

According to an old Vice News article, Medusa’s ears and nostrils have been removed, her eyes are stained green, and she is covered in implanted horns and tattooed scales.

She has also spent thousands of pounds to get a forked tongue to fulfil the ambition to transform into a mythical reptilian beast.

But the transgender, who identifies herself as a woman, has given a thought before undergoing body modification. As per Vice News, the scales in the form of tattoos that cover her body ad face are modelled after the western diamondback rattlesnake.

The outlet said Medusa has endured discrimination, abuse and sexual violence, so over time, she stopped identifying with humans.

She was born as Richard Hernandez in Arizona, US, and claims her journey started a dream she had about snakes. “I believe that I am a real and true life reptoid, a half-human/half-reptilian creature,” Medusa told the Daily Star.

On her social media handles, she recently shared a series of ‘before and after’ transformation photographs spanning from 1990 to 2016. The photos showed her taking on a number of different identities and gradually taking on surgery and inking.