Pant claimed that he dozed off while driving, causing the car to collide with the divider and catch fire. 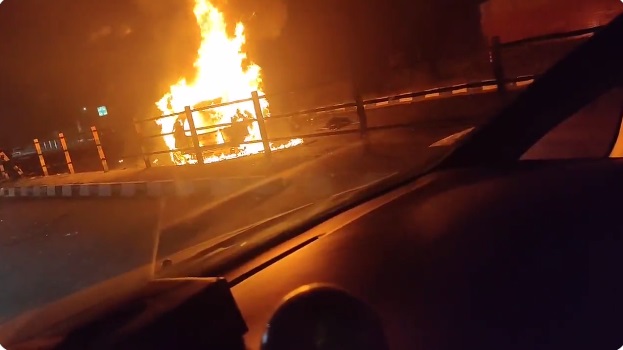 India star wicketkeeper Rishabh Pant’s car caught fire minutes after colliding with the divider due to the force of the collision. Pant, despite his injuries, shattered the glass window of his car and escaped just in time to avoid what could have been a fatal accident. Pant was on his way to Roorkee and was driving alone at the time of the accident.

The Director General of Uttarakhand Police, Ashok Kumar, told that Rishabh Pant’s car met with an accident at around 5:30 am. He also confirmed that the incident occurred in Mohammedpur Jat, near Roorkee. Pant claimed that he dozed off while driving, causing the car to collide with the divider and catch fire. He was taken to the Roorkee hospital and is now being transferred to Dehradun.

Following the collision, Rishabh Pant’s Mercedes caught fire. Notably, Pant was driving alone at the time of the accident and had to break the windscreen of the car to get out. Pant’s main injuries, which led to emergency treatment, are on his forehead and knee. Despite the fact that Pant’s car caught fire, the initial X-rays showed no fractures and no burns on his body.

VVS Laxman, the chief of India’s National Cricket Academy (where Pant was due to travel in early January) said on Twitter that the left-hander is “out of danger,” though the extent of his injuries is not yet fully known.

Pant, 25, was left out of India’s squads for the home T20I and ODI series against Sri Lanka, which begins on January 3. He was scheduled to attend the National Cricket Academy (NCA) in Bengaluru for strength and conditioning before the February Test series against Australia. He most recently batted 93 in the second Test against Bangladesh in Mirpur, which helped India win the series 2-0.

He was not selected for the white-ball series against Sri Lanka and was due to report to the NCA for Strength & Conditioning work ahead of the Test series against Australia, which begins on February 9.
CREDITS-INDIA TODAY