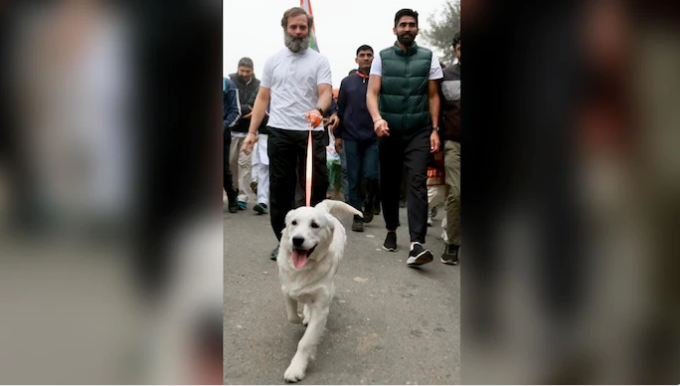 A slew of politicians and celebrities have participated in the Bharat Jodo Yatra led by Rahul Gandhi as it traversed the length and breadth of the country over the last few months. But on Saturday, the Congress leader was joined by a special guest – his sister Priyanka Gandhi Vadra’s pet dog, Luna.

In photos and videos shared on social media, Luna the golden retriever was seen walking ahead of the Gandhi scion as he spearheaded the Haryana leg of the Bharat Jodo Yatra. Leash in hand, Rahul Gandhi walked at his usual brisk pace while an enthusiastic Luna gambolled ahead.

Taking to twitter, Priyanka Gandhi said, tongue-in-cheek, “I see Luna has been kidnapped.”

The pictures of Rahul Gandhi with Luna created a flutter on social media, with several Congress leaders gushing over how the pooch “wanted” to join the Bharat Jodo Yatra.

Along with Congress workers, Rahul Gandhi was also accompanied by boxer Vijender Singh. The Olympic medallist asked Gandhi about his “T-shirt” look in the bitter January cold, to which the Congress leader told him about “rishi-muni doing tapasya”.

The Bharat Jodo Yatra resumed its journey in Haryana on Saturday morning, with scores of people joining the Congress leader Rahul Gandhi-led foot march as it entered Karnal district from adjoining Panipat.

Senior Congress leaders Bhupinder Singh Hooda and Randeep Singh Surjewala were among those who joined the yatra which began from Kohand village in Gharonda. According to the schedule, the yatra will halt for the night in Indri here before moving to Kurukshetra district next morning.

The yatra re-entered Haryana on Thursday evening from Uttar Pradesh. In its first phase in Haryana from December 21-23, the yatra passed through Nuh, Gurugram and Faridabad districts and covered a distance of 130 km.

Also Watch: On Camera: Schoolboy Hit By Car, Dragged For 1 km In UP