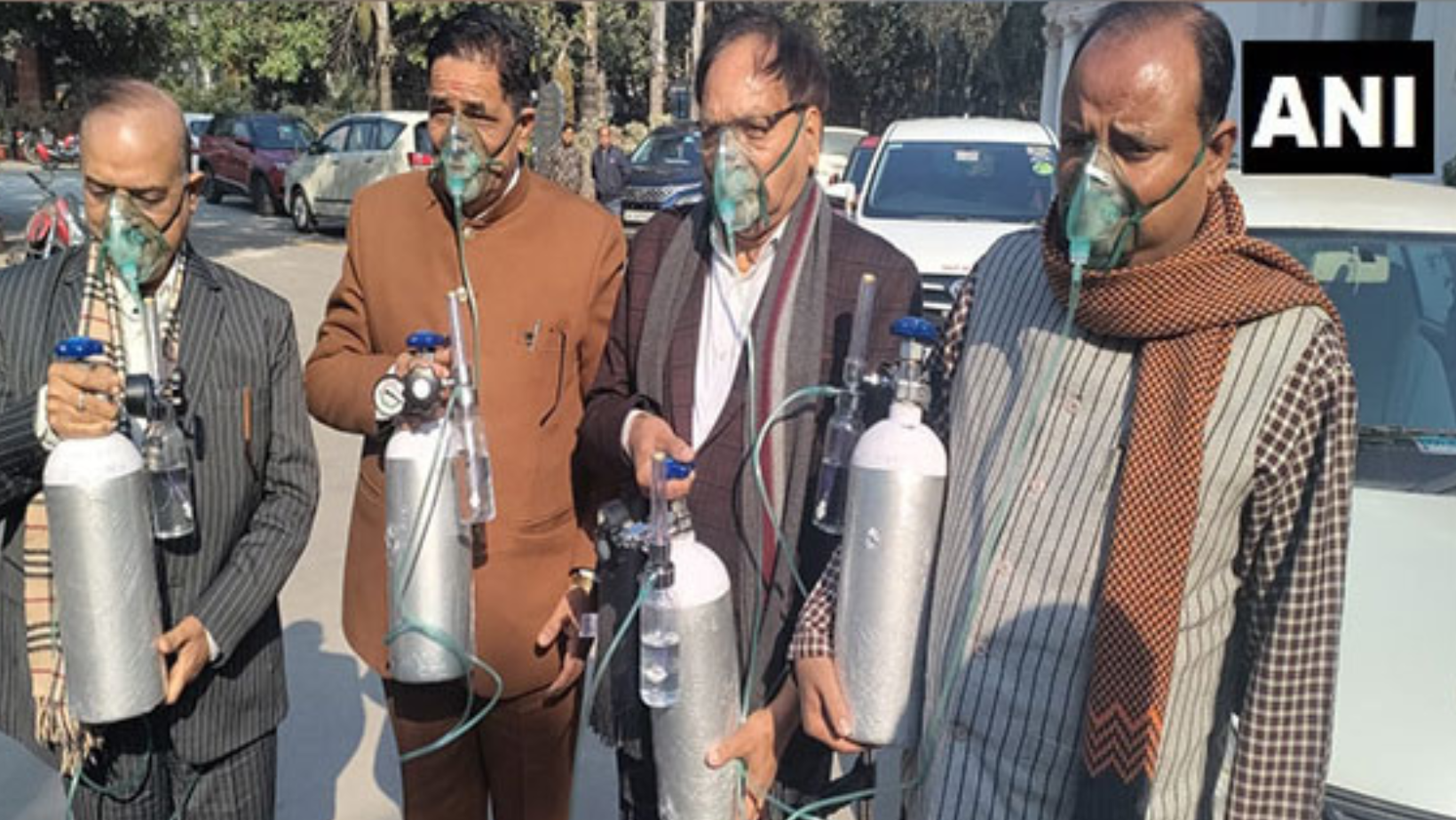 MLAs of the Bharatiya Janata Party on Monday turned up to participate in the Delhi Assembly session carrying oxygen cylinders and wearing oxygen masks to highlight the issue of air pollution in the national capital.
The fourth part of the Assembly Session began today at 11 am.

The BJP and the ruling Arvind Kejriwal-led Aam Aadmi Party (AAP) had recently faced off during the mayoral election of the Municipal Corporation of Delhi (MCD). Air pollution in the city has often been a source of friction between the two parties and had cropped up as a major issue during the recently held civic polls in the city.

The BJP has been blaming the AAP government for its failure to control the pollution in the national capital.

“With a gas cylinder in tow, I would raise the voice of Delhi’s two crore people who have been forced to live in a gas chamber, in the Delhi assembly. The AAP government must come clean on what they have done to make Delhi pollution free,” MLA Vijender Gupta said in a tweet.

Along with Gupta Leader of Opposition of the Delhi Assembly Ramvir Singh Bidguri along with OP Sharma and Abhay Verma arrive for the session carrying oxygen cylinders and donning oxygen masks.

The air quality in Delhi continued to be in the “very poor” category with the overall air quality index (AQI) at 337 on Monday morning.

The Commission for Air Quality Management in the National Capital Region and adjoining areas, following its meeting on January 15, has decided to revoke its January 6 order where it had imposed several restrictions under stage III of GRAP, under which all non-essential construction and demolition activities were banned in the national capital territory.

However, considering the current scenario, actions under Stage I and Stage II of the Graded Response Action Plan will remain invoked, said the commission. These restrictions will be implemented, monitored and reviewed by all concerned agencies in the NCR to ensure that the AQI levels do not slip further to the severe category.

The commission said that the sub-committee will be keeping a close watch on the air quality scenario and would review the situation depending on the air quality and the forecast made by the India Meteorological Department from time to time.

Meanwhile, in view of the tussle between the elected government and the Lieutenant Governor in the past days regarding the powers of the government in Delhi, it is believed that the MLAs of the ruling party may come up with a proposal to discuss this issue in the assembly today.

There is a possibility of discussion on the issue that the elected government should retain the right to give orders to the officials for development works in Delhi.

It is to be noted that even before the commencement of the session, the BJP is besieging the government on this issue. On Friday itself, Leader of the Opposition in the Assembly Rambir Singh Bidhuri raised questions about the government by holding a press conference. He said that the government is evading accountability. Bidhuri has alleged that the Question Hour is not kept in the current session, he also demanded that instead of three days, the session should be of at least ten days.

In view of all these, it can be assumed that due to allegations and counter-allegations between BJP and AAP, the current session could be stormy.

As per the list of businesses, Deputy CM Manish Sisodia will also introduce ‘The Delhi Goods and Services Tax (Amendment) Bill, 2023’.

Also Read: Nepal Plane Crash: Co-Pilot Had Lost Her Husband 16 Years Ago In Similar Mishap, Was 10 Seconds Away From Promotion