The Marathi edition will be led by Editor Marathi Sameer D Shaikh, a journalist with rich and diverse journalistic experience. He would lead the operations from the Pune office 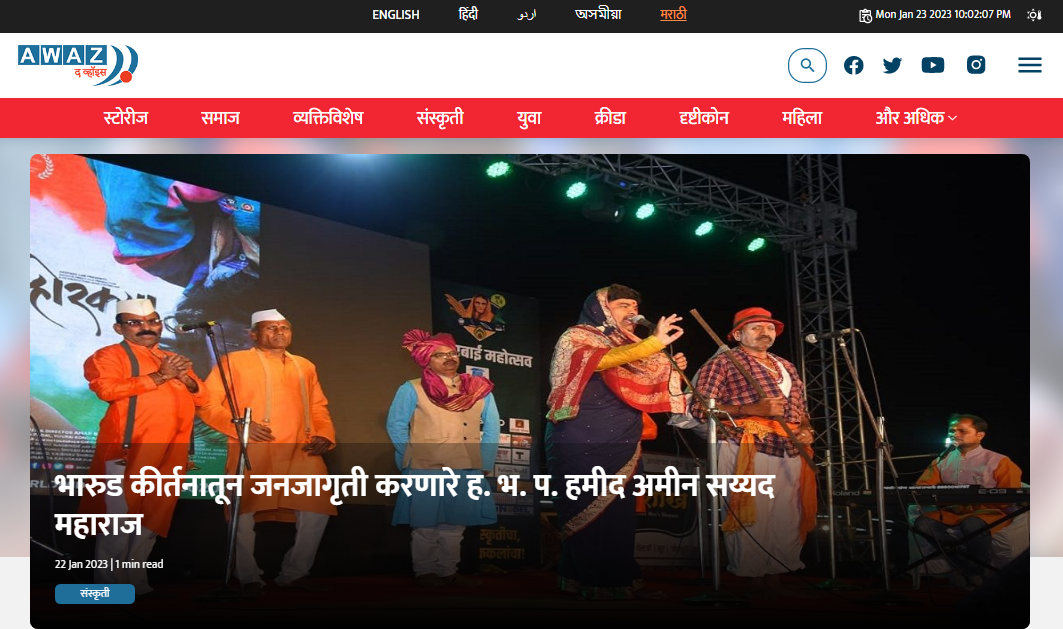 Awaz The Voice, a Delhi based media house which has made a mark for its unique content celebrating India’s syncretic culture and diversity, has launched its Marathi edition on its 2nd anniversary today.

This is in addition to the Assamese, English, Hindi and Urdu editions of Awaz The Voice which are doing exceptionally well covering a wide range of stories from different walks of life.

Two years back, on this day, the foundation of Awaz The Voice, a distinctive editorial platform was laid coinciding with the birth anniversary of Netaji Subhash Chandra Bose.

“Our portal has focused on stories of communal harmony, Indian culture and syncretic shared history and succeeded in carving out a niche for itself on the internet. Encouraged by the overwhelming response of readers and viewers, we launched an Assamese edition in 2021. This has also been received well by the readers and viewers,” Editor- in- Chief of Awaz The Voice, Atir Khan said.

On the second anniversary of the portal, Khan said that Awaz The Voice is here to change the way people perceive the media. He pointed out that people also need something different in this age of noisy news reporting. “Since we provided readers and viewers an alternative source of positive news, our portal is being read by millions each month. We are optimistic that our Marathi portal will increase our reach and help in changing the narrative around the cultural heritage of India”, Khan said.
The Marathi edition will be led by Editor Marathi Sameer D Shaikh, who has rich and diverse journalistic experience and will steer editorial operations from its Pune office. It will highlight stories of harmony and inter-faith unity from Maharashtra.